The UESPWiki – Your source for The Elder Scrolls since 1995
< Blades: Creatures
Jump to: navigation, search

Mercenaries are a creature group in Blades that can interact with the player. Most Mercenaries are hostile, but some are in the envoy of the Bloodfall Queen and can be talked to. Mercenaries, like all human enemies, are weak to poison damage. They resist cleaving, fire, and frost damage. Mercenaries use shields and versatile weapons. The armor and weapons they carry do not affect their resistances or damage, which is solely based on their level. However, the type of physical damage does change based on their weapon type. Mercenaries can use several offensive and defensive stamina abilities. Although they have magicka, they cannot cast any spells.

These are the Mercenaries encountered in the very beginning of the game. Their low damage and high health ensures you can learn the basics of attacking. 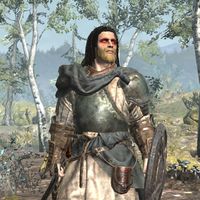 A mercenary is encountered on a bridge:

"Stop right there!
State your name and business!"

I just want to talk to your leader./Want my favorite color, while you're at it?
"Are you deaf, man? I said: state your name and business!"
<name>. I need to see your leader.
"Fine, you can pass. But I've got my eye on you…"

If spoken to afterward:

If you speak to him after fighting another mercenary:

"I should have killed you when I first saw you."

Mercenaries in the camp:

"You want to dance, Warrior?"
It's your funeral.
"This'll be over before you know it."

Tempting, but no.
"Are you a man or a chicken?"

"Well, well… What do we have here?"
Your worst nightmare.

Just a messenger.
"Sure you are."

"Looking for a fight, little man?"
Sure, why not.

Further on another mercenary will talk to you:

If you have attacked the other mercenaries:

"Who are you, and what was all that noise?"
That was me teaching your men a lesson.
"Wait. Hold on… Maybe we can talk this through."
Tell me about the attack on my town.
"The Queen told us to just scare the townsfolk into paying up. Nothing more.
I've no idea how the fire started; must've been an accident. The Queen was furious about it. I swear, that's the truth.
Wights and skeletons have been hounding us ever since, roaming out the Queen's castle.
We weren't hired to fight the undead, so many of us just left.
There's always money to be made with the Greencap Bandits, anyway."
You're nothing but a bunch of cowards.
"Call me a coward all you want. I get to live to see another day, and that's what counts."

Get out of here before I change my mind.
(?)

When spoken to before speaking to the Queen:

"I don't usually kill for free, but for you, I'd make an exception."
"I heard you were ugly… but not *that* ugly."
"I thought you'd be taller…"
"You really stepping in it this time, Warrior."
"Well, well. What do we have here?"
"If the Bloodfall Queen doesn't kill you, perhaps I will."
"There's no way you're walking out of here alive."
"You end is near, Warrior."
"Just give me a reason, Warrior…"
"I've killed better warriors for less…"
"Any last wishes?"
"Your time has come, Warrior!"
"I'll be saving my rustiest blade for you, Warrior"

"Where did you learn to fight like that?"
"With what the Queen pays me, I fight the living, not the dead."
"You can handle yourself in a fight, I'll give you that."
"As long as the Queen pays me not to kill you, you'll live."
"If the Queen approves of you, then so be it."
"Nice work dispatching those bastards."
"I heard you were in the Legion. Is that true?"
"I'm still not certain I trust you, Warrior…"
"With your skills, you'd make a great mercenary."