Easter Eggs are secrets that the developers put in games to give people a laugh when they find them (provided that they understand the joke or reference). Arena has a large number of such jokes. Easter eggs differ from in-game references in that they have been clearly hidden from the player and are unusual with regards to their surroundings; references are often integrated into the rest of game and no attempt is made to keep them secret. 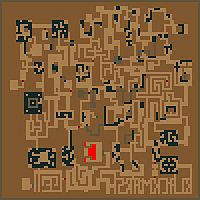 In a 2018 interview on YouTube with Indigo Gaming, Ted Peterson mentions that Ria Silmane was portrayed by one of Arena's programmers. This can be seen to be Jennifer Pratt when looking at the photo of the Development Team.

In the same 2018 interview, Ted also discussed how he used a play on his own name for the answer to one of the riddles in The Halls of Collossus.

The name generator may appear random, but many of the part-names are there because of some references to other works and history:

Many of the province names originated from other fantasy works: