A typical landscape in Morrowind 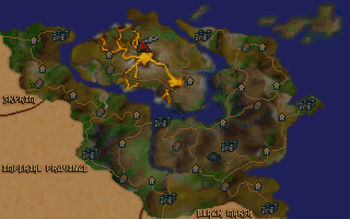 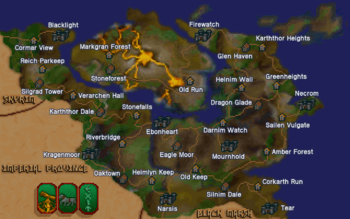 Morrowind with all settlements labeled

Morrowind is one of the nine provinces you can visit in Arena and the starting location for Dark Elf characters. It is a dark, volcanic region in the northeast of Tamriel. The lava-covered Black Isle is separated from the mainland and takes up much of the northern half of the province. It borders Black Marsh to the south, the Imperial Province to the southwest, and Skyrim to the west.

During the Main Quest, you will travel to the Black Gate, as well as locate the eighth and final piece of the Staff of Chaos in Dagoth-Ur, the volcano on the Black Isle.