Daril, literally meaning "seeing everything in ecstasy" in Jel, is a dangerous substance[10] derived from moon adder venom. The aforementioned venom is instantaneously fatal to all but Argonians, and is transformed by an agent in Argonian blood. Those who use daril can see sounds, hear tastes, and smell sights. Daril unfolds in stages, each unlike the last, and confuses the senses.[11]:131 It cannot be safely taken by non-Argonians.[10][12][13] Daril is very difficult to acquire, as its extraction requires the use of specialized tools.[14] The venom is usually fermented in a swamp jelly gas bladder.[15] Some Argonian users coat tiny quills in daril and insert them into the skin around their eyes for an intense sensory experience.[16]

The use of daril dates back thousands of years. In ancient times, stone mortars were used in the process of fabricating the drug.[17] 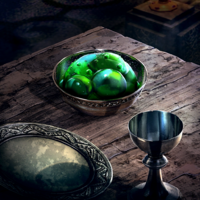 Hag's Breath, the literal breath of a hag is an aphrodisiac[18].

Hist Sap is a substance made out of the Hist's very spirit. When Hist Sap is licked by an Argonian, the Hist is capable of communicating with the Argonian through visions. The sap of the Hist seems to increase the combat prowess of those who drink it. Hist sap has the ability to 'alter' living organisms, which may explain the origin of the Argonians. Ingesting large quantities of Hist-Sap is often dangerous, even for Argonians. The Sap-Speakers of the Miredancer Tribe, known for communing with their Hist and ingesting large amounts of sap in the process, often suffer the effects of sap-poisoning, including "gold tongue" (permanent change of mouth pigmentation to a golden hue), "bark scale" (thickening and darkening of surface scales), and unwanted hallucinations among other symptoms. The Blackwood Company smuggled a Hist tree from Black Marsh to their headquarters in Leyawiin, and extracted the sap to exploit this. However, when consumed by non-Argonian species, the Hist sap had strong hallucinogenic properties that sent them into dangerous bloodlust, though the poor treatment of this particular tree affected the sap causing similar effects on Argonians, as well. At the end of the Third Era, a recruit of the Fighters Guild sabotaged the Hist extraction mechanism, destroying the tree in the process.

Incense of Mara is an expensive fragrance used to enhance romantic activity in the bedchambers of wealthy Bretons and Nords. The more potent varieties are illegal.[19][20]

Tobacco is a product of the Tobacco plant. The smell of tobacco and flin could be found in the Blue Palace during Potema's reign.[21] Snuffboxes are sometimes filled with finely ground tobacco.[22]