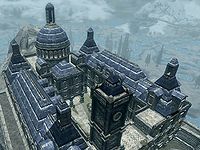 The Blue Palace (also called Castle Solitude)[1] is a large castle found on the eastern end of the city of Solitude. It is the seat of power in Haafingar Hold, where the Jarls of Solitude and even the High Kingship of Skyrim occupy its grandiose and stately halls. The northeast wing contains the Jarl and their court's living quarters, while the southwest wing, known as Pelagius Wing is in a mass state of disrepair and avoided since the death of the eponymous Mad King of Solitude.[2] The Imperial Gardens in the palace courtyard contains a formal and motley assortment of various regional flora like thistle branches and Douad shrubs.[3]

The Blue Palace was built sometime before 1E 143. As the city expanded across the Great Arch, the Avenues District was one of the last places built in the city, and it all culminated into the Blue Palace, which is right on the tip of the arch, directly above the Karth River. It later became the seat of power after the consolidation of Skyrim in the midst of High King Harald's ascension to the throne.[4] Before then, the Jarls of Haafingar ruled from the Emperor's Tower, the citadel of Castle Dour atop of the hill in Solitude.[2]

In 3E 81, the elderly King Mantiarco marries Potema Septim of the Third Empire, who took residence in the Blue Palace. On several occasions, her mother, Dowager-Empress Quintilla visited the Blue Palace and was known to have frequently strolled through the Imperial Gardens.[5] Eventually, the King passes away and their son, Uriel III becomes the King of Solitude and rules jointly with his mother. Throughout the years, Wolf-Queen Potema invited various diplomats and political figures across the Empire's northern tier, from other kingdoms in Skyrim and nations in High Rock and Morrowind. As time went on, the years of negotiation and intermingling culminated into the War of the Red Diamond in 3E 121. The conflict ended in favor of the Third Empire in 3E 137, after a month-long siege on the Blue Palace. The Wolf-Queen died in the palace and according to local myth, her spirit is infused within the castle and drives its ruler into madness.[1]

It is one of the several theories that explain the madness of King Pelagius Septim III. King Pelagius ruled after his aunt's death, by the order of his father, then King Magnus Septim.[1] He was infamous for his eccentric behavior and strange outbursts. He moved from the throne of Solitude to become the Emperor of Tamriel in 3E 145. His sister, Jolethe took his place as the Queen of Solitude.[6] Ever since his death in 3E 153, another myth is that his spirit haunts the southwest wing and ever since then, the Pelagius Wing has been abandoned, as far as 4E 201.[2]