The UESPWiki – Your source for The Elder Scrolls since 1995
< Elder Scrolls Online: Activities
Jump to: navigation, search
"After a hard week of farming, or a long night of being nagged by your wife, there is nothing better than going out for a bit of a fish."
— A Guide to Fishing Tamriel

Fishing is one of several activities available in Elder Scrolls Online. It requires bait and a fishing hole. Bait can be gathered from various creatures around the world, such as beetles, rats, and butterflies as well as obtained via fishing or gathering plants. Fishing holes are numerous and close to shore. They are characterized by sparkling water and leaping fish. Different fish can be caught in different locales. Fish in different water types respond to different types of bait, and using advanced bait, which can be caught from fishing holes, increases the chance of landing rare ones.[verification needed — Does the so-called advanced bait really make any difference?]

Once at a fishing hole, the next step is to choose the type of bait. Using the correct type of bait for that water type will yield more success and prevent the appearance of Used Bait. If you get one, it means you are using the incorrect bait type for that fishing hole. While fishing, you also have a chance to reel in a Wet Gunny Sack instead of a fish, which contains miscellaneous crafting materials such as trait materials, tempers, style materials, or enchanting runes. When a fish is on the line, the float will sink into the water and your character will pull on the fishing rod. Activating it in time will bring in a fish.

Every fishing hole has 15 catches, except ones in the Imperial City, which have 30. It is possible to come across fishing holes with less catches, because players can abandon a fishing hole before it is emptied, leaving the rest of the catches for later players. On rare occasions, a fishing hole can respawn shortly after having been emptied, or even sometimes while you are currently fishing out of it.

When you catch a common fish, you are able to fillet it if you use it from your inventory. Doing so gives you a guaranteed Fish provisioning ingredient, and also has a very small chance of yielding a Perfect Roe, one of the provisioning ingredients used to brew Psijic Ambrosia (as well as Orzorga's Smoked Bear Haunch). 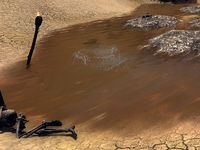 Foul water fishing holes can be found in fetid, murky pools of water such as sewers, swamps and near decomposing corpses. 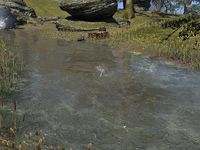 River fishing holes can be found in moving bodies of fresh flowing water that drain into a lake or the ocean. 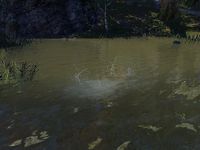 Lake fishing holes can be found in still bodies of water with deep holes or overgrowth. 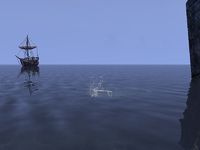 Saltwater fishing holes are almost anywhere on the coast. Coastal cities, such as Ebonheart and Skywatch, have docks with fishing holes. 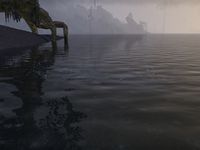 Spawning fishing holes are related to specific quests, as detailed below. 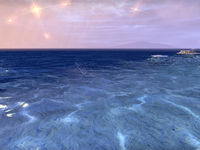 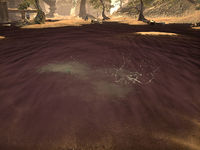 Oily fishing holes are only found in the Clockwork City, and they function identically to Foul fishing holes.

Bait can be obtained by various methods, as detailed below. Bait items can be stored in Craft Bags and are categorized as Provisioning materials, even though most bait isn't used in any Provisioning recipes.

In Clockwork City, instead of the usual foul water fish you will catch either Clockerfish or Typical Barb.

A few Furnishing plans also use bait as ingredients:

In addition to fish, there are several other types of items you can earn by fishing:

Additionally, you may find the following furnishing items for your home: 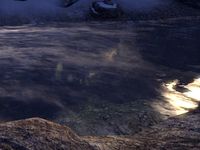 Increases Magicka and Stamina Recovery by x and grants keen eyes toward fish.

Fish Eye is a status effect gained by drinking Hissmir Fish-Eye Rye. In addition to a level-scaled buff to Magicka Recovery and Stamina Recovery, the drink grants "keen eyes" similar to the Keen Eye perks available for crafting material nodes. With this status effect, fishing holes will appear to glow, and the water type will be displayed when you approach (e.g. "River Fish", "Spawning Fish", etc). While the glow effect may be useful in highlighting fishing holes, the secondary effect is largely obsolete since water types are now automatically displayed even without this drink active.

Increases Max Health and Max Magicka. Additionally, fish may be drawn to you.

Lure Allure is a buff gained by eating Artaeum Pickled Fish Bowl. In addition to a level-scaled increase to your maximum Health and Magicka, the food causes fish to be attracted to you. This shortens the time needed for fish to bite, increasing the rate at which you can reel in fish and other items.

Craglorn Angler and the DLC achievements are not needed to earn the Master Fisher achievement. Fish Boon Angler is a quest-related holiday event achievement.