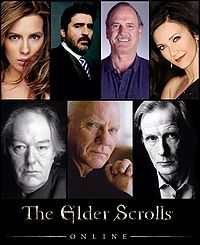 Some of the more famous actors

Elder Scrolls Online is a fully voiced game, and its cast includes many notable actors. On 23rd June 2017, ZOS developers Bill Slaviseck (Senior Writer) and Becky Ichnoski (Dialogue Coordinator) appeared on ESO Live to give an insight into the voice acting process. As of the Morrowind update, Elder Scrolls Online has 77 actors and 150,000 voiced lines. The Morrowind Chapter has over 6000 lines.

Beckinsale (IMDb) takes on the role of Queen Ayrenn, the leader of the Aldmeri Dominion and Queen of the High Elves who is far more comfortable with a blade than her crown.

Cleese (IMDb) plays Sir Cadwell, the cheerful and endearingly mad lost soul who is not afraid of anyone, even a Daedric Prince.

Molina (IMDb) takes on the role of Abnur Tharn, a wily old wizard and politician who is the head of the Empire's Elder Council, and the de facto power behind the Ruby Throne.

Carter (IMDb) plays Azura, the Daedric Prince of Dusk and Dawn from Skyrim who is a popular part of Elder Scrolls lore.

Gambon (IMDb) voices The Prophet, a mysterious blind man who guides the player through their journey to retrieve their soul.

McDowell (IMDb) plays the key figure Molag Bal, an evil Daedric god from another plane who schemes to enslave the mortal souls of Tamriel.

Nighy (IMDb) joins the cast as High King Emeric, a merchant prince whose luck and determination won him the throne.

Stormare (IMDb) plays Jorunn the Skald-King, an unexpected monarch who led his people into an unlikely alliance.

Ward (IMDb) voices Mannimarco, a renegade High Elf wizard exiled from the realm for raising the dead and the world's most powerful necromancer.

Hale (IMDb) appears in the role of Lyris Titanborn, a Nord half-giant, who, along with the Prophet, aids the player on their journey.

Richardson (IMDb) rounds out the cast as Sai Sahan, a noble martial artist and master swordsman.

Becky Ichnoski has posted a list of Summerset voice actors on the official forums - the post can be found here.

Fennorian is played by Robbie Daymond (IMDb), and has played many smaller roles. (Dirge Truptor, Arvnir, and several Khajiit: 1 2 3 4)

This Elder Scrolls Online-related article is a stub. You can help by expanding it.
Retrieved from "https://en.uesp.net/w/index.php?title=Online:Voice_Actors&oldid=2640732"
Categories:
Hidden categories: