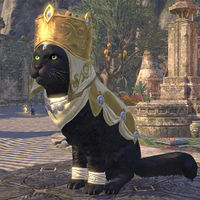 Clan Mother Tadali is the Alfiq Clan Mother of Black Heights and mother of Za'ji, whom she cast out for stealing and fencing a temple bell. She agrees to help with the search for the Dragon Yahgrondu if the temple bell is returned to Khenarthi's Breath Temple.

When you enter the temple, it becomes clear that she has an issue with one of your party members.

"Za'ji claims you seek to save Elsweyr, yes? Tadali doesn't believe anything that comes out of that insolent cub's mouth, but you should not be judged for his failings.
Why have you come here?"
Elsweyr is in danger. We seek the Dragon Yahgrondu to help us save it.
"A noble quest. Unfortunately, this temple will be of little help. We lost one of our sacred temple bells many years ago. We have not been able to call upon Khenarthi's guidance ever since."
What happened to the temple bell?
"Tadali's jekosiit of a son stole it. That is why Za'ji is no longer welcome in this temple.
Still, Khenarthi shows grace in all things, even betrayal. If you find the bell and return it, this one will search for your Dragon."
All right, I'll see if I can return your bell.

You can ask her more about herself after agreeing to find the bell.

"Once you return the bell, Tadali will call the winds of Khenarthi to lead you to what you seek. Should all go well, they will take you to this Dragon."
Tell me about Khenarthi's Breath Temple.
"This is a place of worship, dedicated to Khenarthi, Goddess of the Winds.
She fills Khajiiti sails and guides our ships to safe harbor. She carries the souls of the departed to the Sands Behind the Stars and leads our heroes to glory."
And Khenarthi helps you find lost things?
"We pray to Khenarthi to share her knowledge, for all of Tamriel feels the caress of her winds.
We train to hear her words in the ringing of our sacred bells. Through them, we can find that which is lost. So you must get Za'ji to return the bell."
I want to hear more about this incident with Za'ji.
"Why Za'ji would perform such sacrilege is beyond this one's wisdom.
It wasn't that Tadali was surprised he left. Anyone could see his paws itched for travel. But to steal from our holy temple?"
Why did you offer to help us if you're still so angry with Za'ji?
"Tadali did not become Clan Mother of Black Heights by holding a grudge.
Anyone who seeks to help Elsweyr against these terrible Dragons deserves our aid. Even if it means dealing with Tadali's traitorous son."

Returning to the temple with the bell:

Za'ji: "We found the bell, mother! At great risk to life and limb, we heroically fought our way—"
Clan Mother Tadali: "Stop bragging and have your friend place the bell on its hook. Tadali wants to look at it."

Speaking with her before placing it on the hook:

"Place the bell back on its hook so this one can assess it."

She examines the bell.

Clan Mother Tadali: "No, no, this won't do. The bell is tarnished. It can't perform the ritual like this."

"Tadali was worried about this.
Our sacred bells must be cleansed every Moon cycle, but the one you returned has been away for many years. We need to perform a purification ritual."
What does this ritual involve?
"If you're willing to lend your aid, this one can walk you through the cleansing ritual process. But you must be quiet and listen to her instructions very carefully."
I'll help you with the cleansing ritual.

She then teleports away.

After cleansing the bells, they peal loud and clear.

Yes, yes, you did a beautiful job. Come, walker, speak to Tadali."

"Za'ji's rudeness aside, you cleansed the bell. Tadali will now perform the ritual and find the Dragon Yahgrondu, as promised.
And then you and your companions will leave this temple, yes?"
We'll be on our way as soon as you tell us where to go.
"Now, Khenarthi only shares what her winds can find. Sights, smells, perhaps even a vague direction if we're lucky.
It is up to you to discern a more exact location."
You can't determine Yahgrondu's exact location, just provide an idea where to look. Got it.

She performs her ritual.

Clan Mother Tadali: "Through the sweet winds of Khenarthi and the ringing of the bells, tell us where Yahgrondu dwells!"
Clan Mother Tadali: "The winds journey south sweeping cliffs of lime, and sink deep in a cave that smells of brine. They brush past a Dragon's might to dissolve within a terrible light."

Speaking with her after the ritual:

"The Dragon you seek is somewhere to the south, near limestone cliffs and coastal waters. There should be a cave or mine nearby. Enter it, and there you will find Yahgrondu."

After the events that took place at Pridehome, you must return to Khenarthi's Breath Temple and ask for the Clan Mother's aid once again.

"Though Tadali can sense the winds of death, she is blind to your motives. Tell this one, Dragonguard. Why have you come?"
I need to find a divine mask, buried alongside the hero Ja'darri.
"Yes, this temple cared for Ja'darri's remains long ago.
You seek the Halls of the Highmane, a most sacred place. Its secrets have been passed down across the ages, though perhaps that tradition has died with Hizuni."
I need to get the mask before Ra'khajin does.
"Even if Ra'khajin finds the mask, it would reject him. He will never be worthy of its power."
Clan Mother Hizuni asked me to find the mask. Would you deny her dying wish?
"She did? Hmm. Then perhaps Hizuni saw something in the tapestry of time that this one has yet to hear in the wind.
Very well. Seek the statue of the Forgotten Mane, south of this temple. Just listen for the bells."
I'll head there at once.

You can ask her more questions once you have your mission.

"You will find a bell stand by the statue, much like the one in our temple's courtyard. After so many years of neglect, Tadali is sure the bells are heavily tarnished.
You should cleanse them before this one arrives."
I still have questions, Clan Mother.
"Very well. Ask what you will, Dragonguard."
Tell me more about this divine mask.

"It is Alkosh's light, made solid. Made real. A gift, a burden. A claw to mend the tapestry of time. It is divine will that manifests for those found worthy.
And yes, it is also a mask you can wear. Any statue of Ja'darri shows you that."
What sort of powers does the mask impart?
"What, you want specifics?
It grants the strength of Alkosh's divine will. The power to defeat forces that stand against the natural order. This one could sit here and theorize what precisely that means, but it would do little good."
So you're not exactly sure what power it contains?
"Clan Mother Hizuni was the bearer of those secrets, not this one.
If you are found worthy of the mask, you will learn its power soon enough. But do not look to Tadali for all the answers."

"You know of Ra'khajin, yes? He was trained from a young age to enter the Pride of Alkosh. Upon his death, he was to join Alkosh in a place beyond the Sands Behind the Stars.
But that was not Ra'khajin's only destiny."
What do you mean?
"In times of great need, Ra'khajin was trained to obtain the divine mask from the Halls of the Highmane. Through grueling trials and tests of will, he would prove himself worthy.
And then he decided to become a Dragon Priest. Youth these days."
So the Halls of the Highmane contain trials that I must complete to prove myself worthy of the mask.
"Precisely.
And before you ask, no, Tadali does not know what these trials are. This one guides heroes to their destiny, just as Khenarthi wills it. It is not her job to provide additional assistance or information."

She will appear at the Halls of the Highmane after the bells there have been cleansed.

"Khenarthi calls to you with gentle winds. She can guide you, but never carry you. With cunning, with speed, you must find your own way.
Do you accept Khenarthi's blessing?"
I accept Khenarthi's blessing.
"The drums of Lorkhaj beat strongly. Darkness creeps into your heart and death claws at your throat. With strength, with courage, you must find the light.
Will you face Lorkhaj's darkness?"
I will face his darkness.
"Alkosh watches with a steady eye. His wayward children have forgotten their purpose and threaten to destroy the natural way. With reverence, with virtue, you must claim his mask and mend the threads of time.
Will you walk the path with pride?"
I will walk the path.

She performs a ritual.

"Tadali will pray for Bright Moons, Dragonguard. You could certainly use them."

Return to the Dragonguard Sanctuary after defeating Laatvulon and you'll immediately hear:

Za'ji : "You should have seen the battle, mother! Flames and ice, swords and arrows! It was spectacular."
Clan Mother Tadali : "Mother must say, slaying Dragons is certainly a step up from stealing temple heirlooms."
Za'ji : "You'll never let that one go, will you?"

"You have done well, mask-bearer. Not only did you defeat the Demon from the East, you also turned Tadali's son into a respectable Khajiit.
She is not sure which feat is more impressive."

She appears at Queen Khamira's ceremony, sitting on a bench.

"And so you save us once again, mask-bearer.
Tadali is pleased she was able to guide you, if only for a short time. If you ever lose your way again, just pray to Khenarthi. She is always ready to aid heroes such as you."
How are you and Za'ji getting along?
"Hmm. A simple question with a complicated answer. Tadali will say this. It warms her heart to see Za'ji standing beside the heroes of Pellitine.
This one is glad he has good friends at his side. May Khenarthi's winds carry him in a true direction."