The Necrom Ghostgazer is the favored feline companion of Telvanni wizards. They not only keep the skeevers down, but they can "see" intruding demons and spirits. 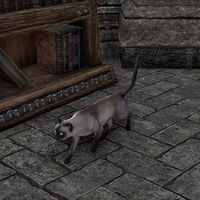 The Necrom Ghostgazer Cat is an upcoming pet that has yet to be available. Its default name is "Phantom".

Your new best friend is a giant blood-sucking insect bloated with pustulant, lethal contagion! It's bursting with both infection and affection—for you! 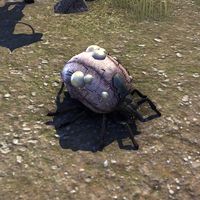 "During the Nenalata evacuation, barded wolf pups fought off a berserking bear until a warrior could take it down. These same pups helped keep their Ayleids warm when resting. Fierce but loving little creatures."—Beredalmo the Signifier 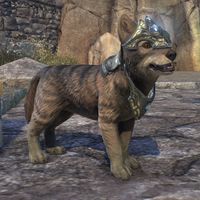 The Nenalata Ayleid Wolf Pup is a Daily Reward that was available on day 21 of April 2021. Its default name is "Lattakynd."

This cub from the Cult of the New Moon will happily trundle along behind you as long as you keep it well-fed. 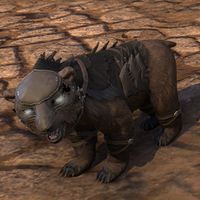 The New Moon Bear Cub is a pet available from the New Moon Preview Crates. Its default name is "Rumbleburr."

The Cult of the New Moon keeps a number of different creatures around, including guars. Due to a peculiarity in its breeding, this guar tries to sing along whenever it hears someone singing. Only dogs can hear it do so, however. 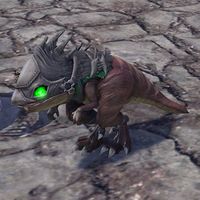 The New Moon Guar Calf is a pet available from the New Moon Preview Crates. Its default name is "Scoundrel."

A handful of daring merchants stole some pack animals from the Cult of the New Moon, and they claim these ponies are as nimble as goats to the point of even climbing trees. Apple orchard farmers beware! 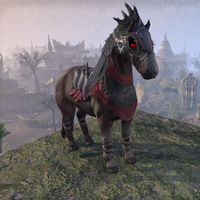 The New Moon Pony is a pet available from the New Moon Preview Crates. Its default name is "Treeclimber."

Though this cub wears the signature barding of the Cult of the New Moon, it acts just like a kitten. Which is to say, you might need to train it to avoid rubbing its head and scratchy barding against your cheek. 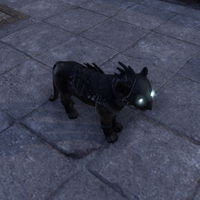 The New Moon Senche Cub is a pet available from the New Moon Preview Crates. Its default name is "Cheeky." It sometimes plays with a blue butterfly.

Cult of the New Moon pups haven't quite grown out of their youthful exuberance, which make them fun travel companions. They often stalk shadows, seeking to destroy them

The New Moon Wolf Pup is a pet available from the New Moon Preview Crates. Its default name is "Shadowstalker."

A frisky little crustacean pal, at home in the water or out of it. 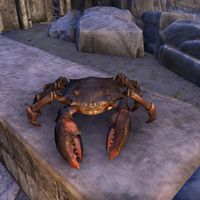 Nibenay Mudcrab pets are given to players with the Imperial Edition of the game. Its default name is "Scissors". The item was originally called "Pet Nibenay Mudcrab".

"In my first months as a captive of the Reachmen, the only thing that made life bearable was my beloved pet, the Nightfall Sabre Cat Cub I was allowed as a companion." —Arthenice Belloq 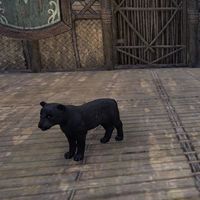 The Nightfall Sabre Cat Cub is available as a Legendary-level reward from Xanmeer Crown Crates. Its default name is "Duskitty".

Some say you should embrace your nightmares. With this darling little bear cub, you can do exactly that! This trundling bundle of adorable terror might have flaming eyes and fiery paws, but it loves hugs. 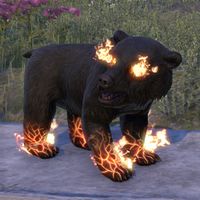 The Nightmare Bear Cub is a limited-availability pre-order bonus for those who pre-order the Blackwood Chapter. The pet will be added to your account immediately after you pre-purchase Blackwood. This promotion will last until March 17, 2021. Its default name is "Nightbear".

Some may find the fiery cuteness of this horned cub unbearable, but you can handle it! Just watch out for those adorable little paws—they're hot as coals.

from October 22 through November 10, 2020. Its default name is "Heatwave". When summoned, it leaps out of the ground in a gout of flame.

Despite the fact that this night-black senche-tiger cub has burning paws and flaming eyes, it's so adorable it might be a nightmare you never want to awaken from!

"Be scared—be very scared!" say this pup's big fiery eyes. "Please?" But no matter how much it tries to frighten like a grown-up Nightmare Wolf, this flaming fuzzball is still completely adorable. 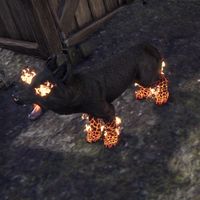 The Nightmare Wolf Pup was available in the Crown Store for 010001,000

from September 27 to October 1, 2018. It is also available as an Epic-level reward in New Moon Crown Crates. This pet's paws and eyes are on fire, as well as the tip of its tail. Its default name is "Ember Pup".

"The red glow of a Nightrose stems from its time of birth," a spelunker claims. "If the sky above is red, so is the fawn." While some scoff at this, all agree on one thing: Nightroses have a sixth sense for danger, nudging awake any chosen family.

The Nightrose Vale Fawn is an upcoming pet. Its default name is "Rosewater".

The goats that come from the ruin of Ninendava in Cyrodiil are no mere domestic livestock. They have long been used in certain forbidden Daedric rituals—and have even been known to lead mortals through those arcane rites.

The Ninendava Sacred Goat is available in the Dwarven Crown Crates as an Epic-level reward. Its default name is "Hircine". It was originally datamined as "White Goat" in Patch 2.1.0.

Even as cubs, the litter-mates of the Noble Riverhold Senche-Lion prides exhibit the breed's hallmark attributes of courage and loyalty, bravely defending their masters against encroaching beetles and butterflies! 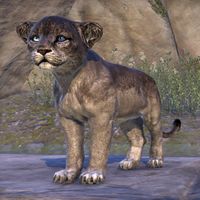 The Noble Riverhold Senche-Lion Cub was given out to players as a daily reward. Its default name is "Pride-Cub".

Native to Tamriel's northern forests, in the wild the Lynx lives on a diet of rabbits, hares, and skeevers. Domesticated, the Lynx makes a dignified and stylish animal companion, popular with the Nord aristocracy. 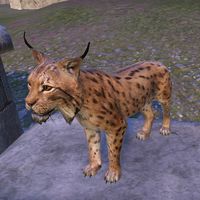 Northern Lynx pets were available from the Crown Store for 00700700

, and later were a Superior-level reward in Reaper's Harvest Crown Crates. Its default name is "Jarlcat".

The thief-god Rajhin is said to have stolen these enchanted purple Ponies from somewhere in Oblivion, but when his worshipers are asked where he got them, they just laugh and say, "Noweyr!" 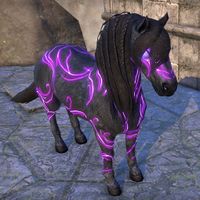 The Noweyr Pony was available during a promotion as Twitch Prime Loot from August 27 through September 24, 2019. This article [1] details how to receive the Noweyr Pony and the matching mount. Its default name is "Neigh-Neigh".