Though it may some day grow into a horrific face-eating behemoth, when it's young the Haj Mota Hatchling is undeniably cute. For a while, they are trainable, come when called, and happily waddle after their masters wherever they may go. 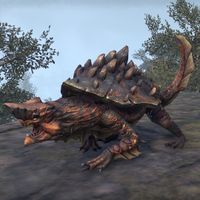 The Haj Mota Hatchling was available from the Crown Store for 010001,000

After news of the Seventh Legion's presence near Hallin's Stand spread, several Evermore citizens moved quickly to protect some at-risk fauna, among them a breed of easily domesticated jackals. Now one of these fierce companions can roam at your side. 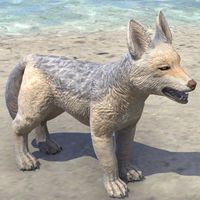 . Its default name is "Spiritcaller".

If one lives in a house haunted by spirits of the departed, acquiring a Haunted House Cat to keep the ghosts company will distract them from haunting you. The fact that it can see the spirits of the dead doesn't keep this cat from being sweet and sociable. 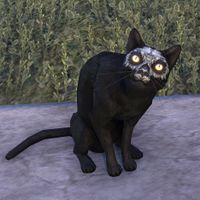 The Haunted House Cat was available as a Daily Reward during October 2018. It is now available as an Epic-level reward in New Moon Crown Crates. Its default name is "Spectre Kitty".

"Gah! Netches! Mine kept getting stuck behind closed doors. So my friend and I made this ghostly netch. Yours for a song, five-claw! Not at all necromantic. Promise!"—Lanjo, merchant 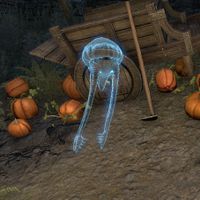 The Haunting Netch is available as an Epic-level reward in New Moon Crown Crates. Its default name is "Spooky".

Though some scholars in Alinor have hypotheses about why an indrik would linger after death, none have as yet proven them. Perhaps these indriks have simply picked someone worthy to follow for all time? 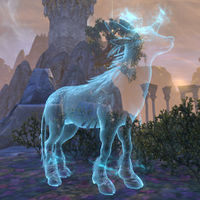 The Haunting Indrik could be bought from the Impresario for 000001010

during the 2020 Jester's Festival. Its default name is "Requiem".

Hearthfire Hatchlings, which are found only in an orphaned state, appear to be the offspring of a normal kagouti and one of the Hearthfire variety. Driven away by ordinary kagouti, these hatchlings are in grave need of adoption. 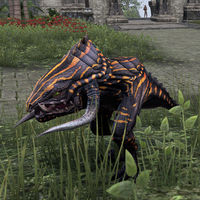 The Hearthfire Hatchling is a young half-blooded Hearthfire Kagouti that was available for a limited time in the Crown Store for 012001,200

. It returned during the Morrowind Celebration Event in 2019 and was on sale for ESO Plus subscribers. Its default name is "Scorchy".

Native to the Cyrodilic Heartland, the Brindle Badger is said to be as fierce as a wolverine, yet as cunning as a fox. A Brindle Badger adorned the banners of Hrol when he led his knights on the Quest of Sancre Tor. 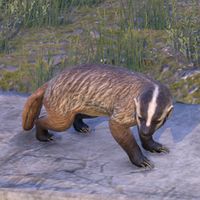 The Heartland Brindle Badger is available as a Superior-level reward in Hollowjack Crown Crates. Its default name is "Sir Snarls".

The pups of the Helkarn Wolves from Elsweyr are almost as sociable with people as dog puppies, so they get a lot of attention when young. This probably contributes to their docility as mounts when full grown. 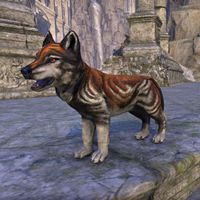 from May 3 to May 7, 2018. It is now available as an Epic-level reward in Akaviri Potentate Crates. Its default name is "Cuddlepaws".

Some scholars believe Argonians are descended—or were uplifted—from these tree-dwelling swamp lizards. True or not, they make great pets, affectionate and low-maintenance.

from October 8, 2015 to May 30, 2016. It is also available as a Superior-level reward in the Storm Atronach Crown Crates. Its default name is "Princess".

An ice wraith from the slopes of the highest mountain in Tamriel.

The High Hrothgar Wraith was given for three months paid subscription as part of the discontinued loyalty program. Its default name is "Tinsel".

The Witches Festival, which celebrates horror and death, also has a regrettable tradition of wanton vandalism associated with it, especially among Tamriel's callow youth. The so-called "Hollowjack Netch" appears to be a victim of this practice. 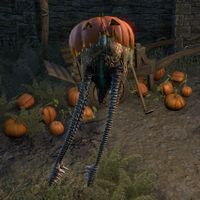 The Hollowjack Netch was available for a limited time with the Hollowjack Crates as a crown gem exclusive, and was priced at 00300300

. Its default name is "The Sticky One".

When asked about the rumor that the Hot-Blooded Bantam Guar had been bred as a vampiric sub-species by the disgraced mage Darvasen before he was exiled from Shad Astula, Arch-Mage Valeyn replied, "What nonsense! They just like to eat tomatoes. Trust me." 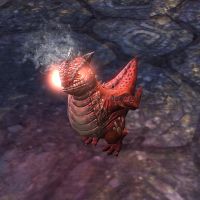 The Hot-Blooded Bantam Guar is an exclusive Bantam Guar pet granted for attending conventions in-person in 2019. Its default name is "Gory-Guar".

The Hot Pepper Bantam Guar Breed is native to the "spice island of Esroniet, the source of much of Tamriel's nutmeg, cloves, mace, and hot peppers. And the Pepper Guar has a spicy little personality to go with its name! 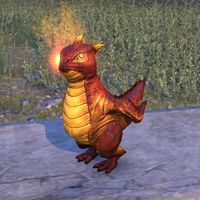 The Hot Pepper Bantam Guar is an exclusive pet that was granted exclusively to players who participated in the Elder Scrolls Online: Elsweyr announcement stream. Its default name is "Blisters".

This green-eyed feline is a distant relative of the Alfiq Khajiit. 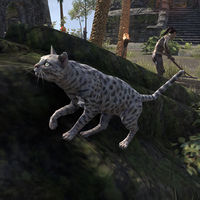 from (?) to November 6, 2017. It is also available as a Superior-level reward in the Scalecaller Crown Crates. Its default name is "Deathstare".