This little critter's bright, beautiful colors are actually a warning to predators that it's a potent mouthful of poison. Fortunately for Tamriel's humanoid mortals, its venom affects them as no more than a mild hallucinogen. 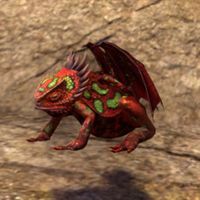 The Kaleidotropic Dragon Frog is available as an Epic-level reward from the Xanmeer Crown Crates. It spews green fire. Its default name is "Touch-Me-Not".

Silver hide and dark gray stripes mark these domesticated boars, which once ran wild around Karthwasten. Their stomachs run on a tight schedule, making them perfect for those who lose track of time. Nothing like waking up to boar snuffles in your ear! 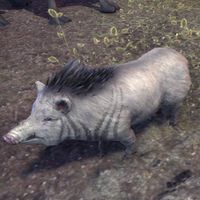 The Karthwasten Silver Boar is available as a Superior-level reward in Akaviri Potentate Crates. Its default name is "Snuffles".

The Karth Winter Hound is the snow-white breed of the Markarth Bear Dog, snowy year-round for hunting in Skyrim's snow-capped peaks. Some Reach clans reserve the Winter Hounds solely for chieftains.

When the Karth Winter Hound has puppies, it even softens the Briarhearts of the Reachmen. Who's a good barbarian pup-pup, then? Is it you? It IS you! 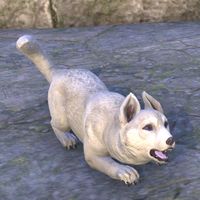 The Karth Winter Pup is available as an Epic-level reward in Dragonscale Crates. Its default name is "Snowdrift".

The Reachmen of Western Skyrim use their domesticated ice wolves to protect their clans' livestock. they also keep the herds healthy, as the Karthwolves themselves will cull out the weaklings. 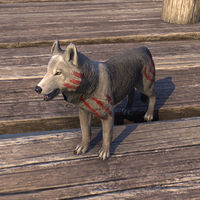 The Karthwolf Shepherd was previously available in the Crown Store for 010001,000

. Its default name is "Icepack".

Some speak of Reach clans that keep these little bundles of fluff as companions—and hunt down any who harm them. Regardless of veracity, these creatures love to be cuddled, often sleeping in the crook of their companion's necks.

The Karthspire Coney is an upcoming pet. Its default name is "Fuzzwuzzle".

The common or Kindlespit Dragon Frog is an engagingly preposterous little pal whose antics never fail to amuse. Hammerfell tales say the huge Dragons of ancient legend were all turned into these tiny flame-puffing hoppers. 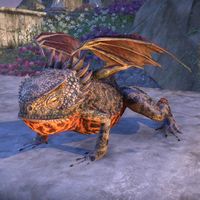 . It first released alongside the Thieves Guild Collector's Edition with the Hammerfell Camel on March 7, 2016 for PC, March 22 for XBox One, and March 23 for PlayStation4. Its default name is "Heartburn".