The young of most creatures are cute, even adorable. That's … not really true of the Larval Yaghra. If you have one of these following you, you're either telling the world you don't give a Daedric damn what they think, or you're a Sea Sload in disguise.

The Larval Yaghra is available in the Crown Store for 1000 Crowns. Its default name is "Splinters". It is categorized as a Daedric Pet, despite Yaghra not being considered Daedra.

Summerset's Salamanders are amphibians that, when threatened, defend themselves with an impressive array of elemental powers. The bright orange Lava Line on this breed is an indicator of its reliance on natural Flame magic. 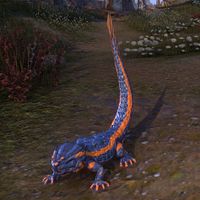 The Lava Line Salamander was available in the Hollowjack Crown Crates as a Legendary-level reward. Its default name is "Newton".

This wolf's experiences with Dragons surpasses that of many Dragon Hunters. And it has chosen to be at your side! An excellent match, indeed. 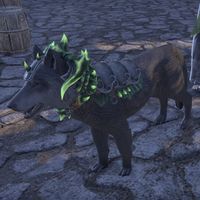 The Legendary Dragon Wolf is available with the Dragonhold Collectors Edition, and can also be bought from the Crown Store for 010001000

Add this cute bat to your menagerie. Not only does it eat pesky bugs, but it'll keep you company on your adventures! 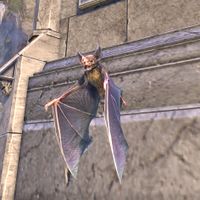 The Long Winged Bat was distributed to those who watched the announcement stream on Twitch for The Elder Scrolls Online: Greymoor. Its default name is "Squeaks".

As savage as Welvas are, history indicates that every pastoral society in Craglorn's long history—Nedes, Yokudans, Goblins, and Orcs—has domesticated them at some point. They may be ugly, but they sure are loyal. 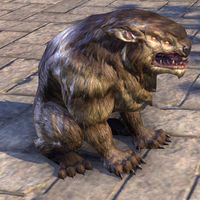 Longhair Welwas are welwas that are available from the Psijic Vault Crates as Epic-level reward. Its default name is "Fell-Chaser".

A Dwarven Sphere of the long-lost Dwemer. 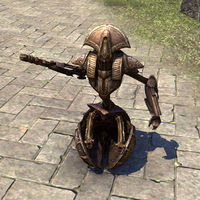 The Loyal Dwarven Sphere is a pet that was given as a loyalty reward for six months paid subscription. It alternates between following the player in its sphere form and in its upright form, and when the player crouches, it rolls up into its sphere form. Its default name is "Gyro".

"The forces of Nocturnal's attempted invasion of the Colored Rooms were inadvertently accompanied by some Evergloam Daedrats, which afterward were rounded up, Lustrated for purification, and then banished to Nirn" — Sapiarch Galaadil 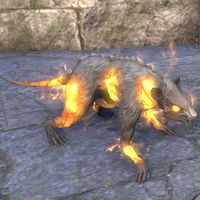 Lustrated Daedrat is a pet that is available as a Legendary Reward in Dragonscale Crown Crates. Its default name is "Purity".