Once considered a delicacy by Maormer, these iridescent mudcrabs regard every creature a threat, even other mudcrabs. With proper handling, it probably won't snap at your nose. Probably. 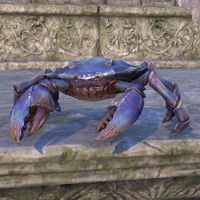 The Wasten Coraldale Mudcrab is available as a Superior-level reward in the Iron Atronach Crown Crates. Its default name is "Toetugger".

The Ice Wolves that lope along the White River of northeast Skyrim are associated with both the goddess Mara and the Wolf Totem of Atmora - but it's mighty hard to think of their mythic stature when you're rolling around in the snow with an Ice Wolf Puppy! 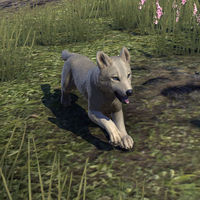 for a limited time. It is also available as a Legendary-level reward in the Flame Atronach Crown Crates. Its default name is "Wurf".

Some believe that gaining Meridia's favor is like gripping a double-edged blade tightly with bare hands. Yet, if you perform an action she likes, she may gift you with a White Torchbug—perhaps the least worrisome of her favors!

The White Torchbug is an upcoming pet. Its default name is "Sparky".

The White-Gold Imperial Pony was said to have made its debut as the birthday present for a noble's daughter, though which family claims this prestige is still hotly debated throughout Cyrodiil. 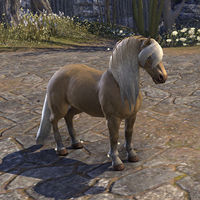 White-Gold Imperial Ponies were available from the Crown Store for 010001,000

Known for both their stubbornness and their ability to climb on structures at the worst possible times, the Whiterun Mottled Goat picks a favorite person and tries to follow them. Affectionate? Only if you find gentle headbutts to be so. 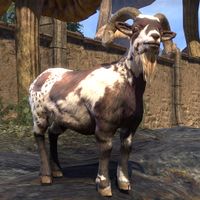 The Whiterun Mottled Goat is available as a Superior-level reward in Nightfall Crates. Its default name is "Cheesemonger".

The hunting dog of the Nords of Skyrim, known to face down sabre cats for their masters. 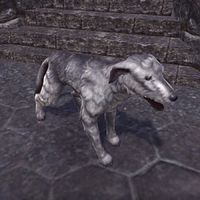 The Whiterun Wolfhound was given to players who ordered the Imperial Edition on Steam before July 21, 2014. It also comes with the purchase of the official Elder Scrolls Online Nord figurine from Symbiote Studios (redeemable only on PC/Mac; not to be confused with the Pop! Vinyl Nord figurine). Its default name is "Horker", after the eponymous animal.

"Witches refused to share the grisly secrets of the Wickerfright summoning ritual … until now. Upon appearing, its wooden countenance twists into an eerie smile—a frightful expression, indeed!"—Warlock Aldaale 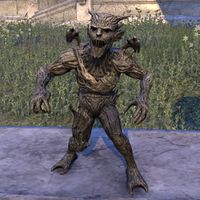 The Wickerfright Banekin was available as the day 21 daily reward for May 2020. It is now available as a Superior-level reward in Ayleid crates. Its default name is "Twistroot". 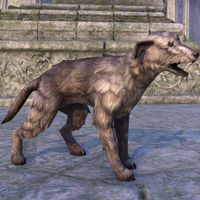 The Windhelm Wolfhound was available from the Crown Store for 00400400

North of Windhelm in Skyrim, where the snow on the heights never melts, the Nords' great Wolfhounds have lighter and fluffier fur coats. In addition to barking, they even howl a bit like the wolves they pursue. 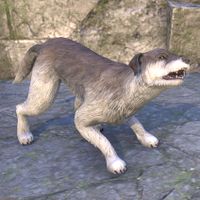 The Winterhold Wolfhound is available as an Epic-level reward in Dragonscale Crates. Its default name is "Drift Dog".

Equipped with a hat, this black cat makes its way in the world at your side, leaving little fiery pawprints behind as it goes. 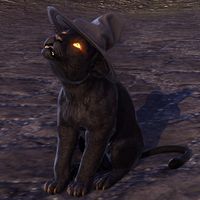 The Witch's Infernal Familiar was available in the Crown Store for 010001,000

during the first week of the 2019 Witch's Festival. It leaves behind flaming paw prints as it walks. Its default name is "Flamepaws".

The Witches Party Ghost Netch is an upcoming pet. Its default name is "Li'l Avalanche".

The Wolf-Lizard Pup is simply adorable when it tries to howl, just hisses instead, and looks ever so confused.

The Wolf-Lizard Pup is an upcoming pet. Its default name is "Hissy Howl".

The Woodhearth Brown Rabbit was available in the Crown Store for 010001,000

The Orcs of Wrothgar have a hardy breed of goats well-suited to the area's rugged terrain and changeable climate. Each goatherd particularly prizes his herd's master Buck Goat; these tend to be both intelligent and pugnacious, good animal companions. 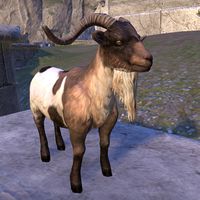 . Its default name is "Billy".