There is some debate among naturalists as to whether the Ice Nixad is a separate breed that is mainly seen in the winter because it hibernates during the warm months, or whether it's just a winter phase of ordinary Nixads that sometimes stays year-round. 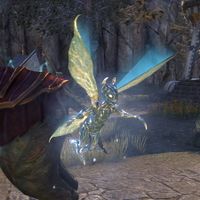 While studying arcane husbandry, Mage Naleldil discovered a long-forgotten Ayleid ritual capable of granting luminescent qualities to common salamanders. Now, due to an unexpected population explosion, she gives them to those who impress her. 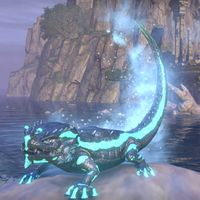 The Ice-Glow Salamander is available as an Epic-level reward in Gloomspore Crates. Its default name is "Stickytoes".

One might think that being frozen in a glacier for several thousand years would damage a delicate mechanism like a Dwarven Spider, but in the case of the Icebound units it seems instead to have preserved them in perfect working order. 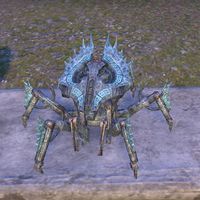 The Icebound Dwarven Spider is awarded to those who complete the Frostvault Conqueror achievement. Its default name is "Skidley".

Ask an Iliac Bay native what they'd miss most about their home and the answer might be the sight of tree-climbing spotted goats. Fortunately for these goat-lovers, the creatures now bleat their way from the bay to climb all manner of trees in new homes. 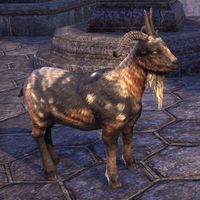 The Iliac Spotted Goat is available as a Superior-level reward in Iron Atronach Crates. Its default name is "Timberblat".

The imgakin monkey pet is lively and cheerful, even in the grimmest of dungeons.

The Imgakin Monkey was given to players who participated in any of the weekend PC beta events. Its default name is "Raisins".

Mastiffs are the most common breed used by the Imperial Legions as battle dogs. The Imperial War Mastiff in particular is the mascot and symbol of the storied Second Legion, headquartered in peacetime in the vicinity of Bruma. 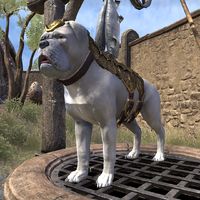 The Imperial War Mastiff was available from the Mysterious Reward Boxes from the Ten Million Stories dungeon reward event. It later became available in the Crown Store for 010001000

Though it may look like it just crawled from the depths of the Deadlands, the Infernal Sep Adder is actually native to the higher altitudes of Hammerfell. As pets, they are … not exactly affectionate. Great conversation starters, though. Wear heavy gauntlets when handling. 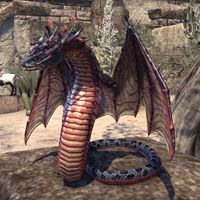 The Infernal Sep Adder was available in the Crown Store for 010001,000

. Its default name is "Atrocity".

"The Dwarven Spiderlings from the Infernium Forge are unusual and distinctive, indicating to this Dwemer scholar that they all come from the hand of a single Deep Elf artisan." —Guylaine Marilie 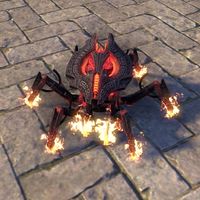 The Infernium Dwarven Spiderling is available to users who verify the email associate with their Elder Scrolls Online account and opt in to marketing emails in their account preferences. Players who have already verified their email and opted in to marketing emails need only log in to the Elder Scrolls Online website to be able to receive this pet. Codes for the Infernium Dwarven Spiderling was distributed to users throughout the month of July in 2020. Its default name is "Emberlegs".