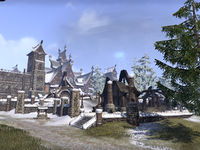 Bruma is a city in northern Cyrodiil, south of Fort Dragonclaw. It is connected via the Transitus Network to Fort Dragonclaw. The city has been conquered by Dremora and Shadowed Path cultists, leaving few survivors, but the area around the manor house can be captured for your alliance by gaining control of the three objective flags. A Dark Anchor and Skyshard can be found here. As the residents are quick to point out, no reinforcements have been sent from the nearby alliance stronghold of Fort Dragonclaw, and the local militia are hostile towards the alliance hold-outs that can be found around the manor house.

Closing the dolmen here is required to mark the 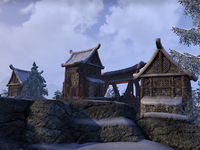 The Bruma Safe House is located at the southern end of the city. The alliance which controls the city can use the Safe House to access the Transitus Network. It is linked to Fort Dragonclaw and Fort Aleswell.

There are three capture points in Bruma, all of which must be controlled by the same alliance in order to gain control of the town:

†Only appears during Lost and Alone