The Dwarven Theodolite was a sort of automated measuring device designed to explore and survey subterranean areas; this version is notable for its distinctive red "eye."

Carnelian Theodolites are available from the Crown Store for 012001200

, and with the Wrathstone Collectors' Bundle. Its default name is "Rufus".†

Though Argonians do relish the elastic flesh of the Black Marsh Swamp Jellies, the whimsical names they give them refer more to their appearance than to their flavor. 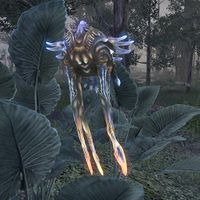 . It was also available with the Murkmire Collector's Pack. It is now available as an Epic-level reward in Sovngarde Crates. Its default name is "Melonbobber."

The Cave Bear Cub may miss its mountain home, but that just makes it twice as loyal to its mortal companion. 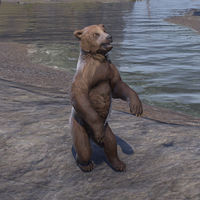 A brown bear cub released alongside the Orsinium DLC, available from the Crown Store individually for 00700700

. When idle it may rear on its hind paws and play with a butterfly. Its default name is "Honeymuzzle".

The colors exhibited by the Cerulean Scorpion make it a creature sought after by artists and by those who prefer their companions to have a bit of a sting to them. 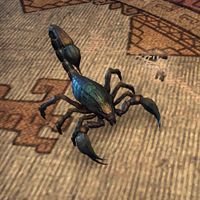 The Cerulean Scorpion is a pet available in the Baandari Pedlar Crown Crates as an Epic-level reward. Its default name is "Clamper".

A denizen of Tamriel's northern shores, the Chub Loon survives on the bounty of the sea, dining on small fish of all types. Though clumsy and awkward on shore, it flies gracefully and is a nimble swimmer. Best of all, they make affectionate pets. 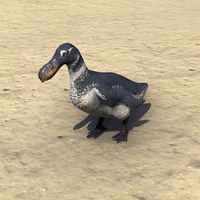 The Chub Loon is a pet available in the Storm Atronach Crown Crates as an Epic-level reward. Its default name is "Waddles".

Long ago, some of the striped fawns of Clearspring Tarn felt a call to migrate elsewhere, and they eventually found protection and a home with the Falinesti Wood Elves. Though you can spot them in many areas, they retain their original name. 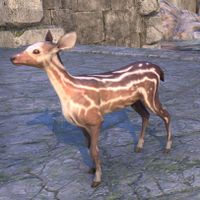 The Clearspring Striped Fawn is available from the Crown Store individually for 010001,000

The Clockwork Shalk is a fabricant from the hidden laboratories of Sotha Sil. It seems programmed to obey the master it imprints upon, but who knows what secret orders it will follow if events occur to trigger them? 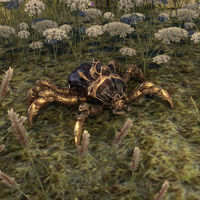 The Clockwork Shalk is available in the Dwarven Crown Crates as a Legendary-level reward. Its default name is "Cogroach".

Originally designed for probing tiny, inaccessible areas of the Clockwork City, the mechanical Skeevaton can be set to recognize and follow an individual mortal, replicating pet behavior on the surface of Nirn. 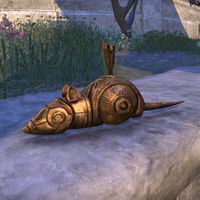 , or as part of the Clockwork City Collector's Bundle. Its default name is "Skweex".

Both the fleecy white sheep and their doughty shepherds enjoy the clear water of Cloud Spring in High Rock. Though dangers abound, the sheep avoid the worst of it, making the rumors of their ability to sense and avoid peril seem plausible. 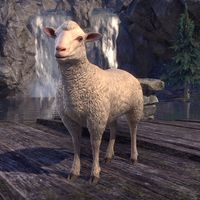 The Cloud Spring White Sheep is available as a Superior-level reward in Ayleid crates. Its default name is "Praan".

Of all the varieties of wild senche-cats, the Clouded Leopard may be the most beautiful. Their cubs love to play-fight, and stalk tiny bugs with the most hilariously serious expressions. 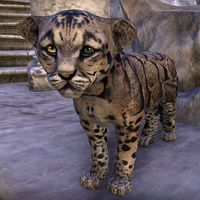 The Clouded Senche-Leopard Cub is a pet available in the Storm Atronach Crown Crates as a Legendary-level reward. They were also given away as gifts to users who attended the Bethesda Game Days livestream on February 29, 2020. To receive one, users must have had their ESO account linked with their Twitch account. Its default name is "Li'l Thundercloud".

The blue-scaled Cobalt Sep Adder is the rarest of the wild varieties, and almost never seen in captivity. They are particularly prized by the royalty of Hammerfell's contentious city-states, as they're said to be able to detect poison in drinks and food. 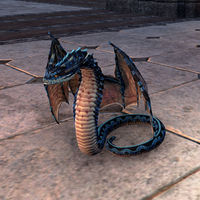 The Cobalt Sep Adder is a pet available in the Wild Hunt Crown Crates as a Legendary-level reward. It was originally datamined as "Sapphire Adder" and had the description "Diagna, God of the Sideways Blade, is said to have created the lightning-blue Sapphire Adder by passing his orichalc sword over a common Sep Adder when he needed a symbol of Redguard ferocity during the first Siege of Orsinium. And fierce they are indeed!", but was later changed. Its default name is "Poison Pals".

Start with a dollop of wiggly cuteness, add a dash of the Coldharbour glow, and you get a bantam guar that causes "oohs!" and "ahhhs!" wherever you go, plus helps you avoid stubbing your toe at night when you leave your bed. Genius!

Coldharbour Bantam Guar is an upcoming pet. Its default name is "Wiggles".

Young durzogs acquired from the Coldsnap goblin tribe are temperamental and require a firm hand. After you've established firm boundaries with this creature, though, its loyalty is boundless. 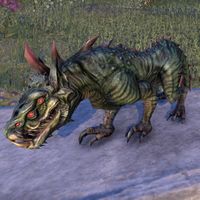 from September 26 through 29, 2019. It is now available as a Superior-level reward in Sovngarde Crates. Its default name is "Sludgepuppy".‡

Dark Elves of House Hlaalu, knowing that Vvardenfell isn't the only place with deadly flora, fauna, and folk, bred a nix-hound that can thrive in different environments. Even with its gorgeous blue-purple shading, it still possesses a menacing air. 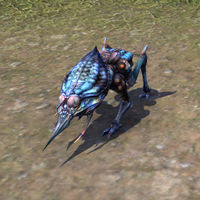 The Coldspring Nix-Hound is available as a Superior-level reward in Gloomspore Crates. Its default name is "Bugeyes".

Though Badgers mainly eat burrowing rodents, farmers hate them because they'll take chickens, kwama scribs, and bantam guar if they get the chance. Cranky and irritable, they make terrible pets - which makes them a favorite among the Undaunted. 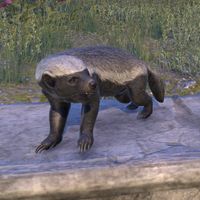 Colovian Badgers were available from the Crown Store for 00700700

from July 7, 2016 to (?). They are now a Superior-level reward in Reaper's Harvest Crown Crates. Its default name is "Grumps".

The Copperback variant of the Markarth Bear-Dog is renowned for its responsiveness to training, but keep an eye on it, or it will get into all sorts of mischief. Especially keep an eye on its eyes, which are two different colors! 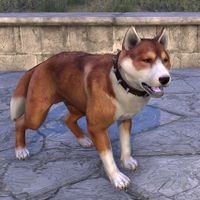 The Copperback Bear-Dog is available in the Dwarven Crown Crates as a Legendary-level reward. Its default name is "Winker".

Native to Summerset Isle, the gaudy Coral Mudcrab has elaborate coral growths on its back, as well as a claw that looks comically over-sized, but which is surprisingly functional. Count fingers after petting. 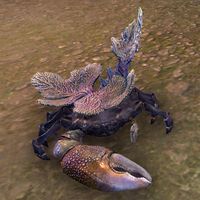 Coral Mudcrab was available from the Crown Store for 012001200

until July 2, 2019. It is available as a Legendary-level reward in Baandari Pedlar Crown Crates. Its default name is "Scatheclaw".

The blue and silver of the Daggerfall Covenant decorate this adorable Breton Terrier, who wants to sniff all the sniffs while you go to war in Cyrodiil. For King and Covenant! 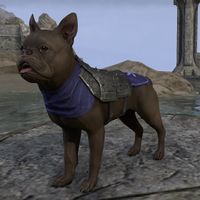 This pet was first made available during 2021's Midyear Mayhem celebration. Its default name is "Kingling".

Credit for the irresponsible and foolhardy project of domesticating the Craglorn Welwa is usually claimed by the Iron Orcs, who are always looking for ways to prove that they're "more bad-tusk" than the Orcs of Wrothgar or Skyrim. 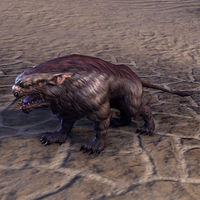 If you're looking for a warm and fuzzy companion animal to cuddle with, don't start with the Crested Reef Viper. But if what you want is an intimidating reptilian monster that says "Don't mess with me, city boy," this is the ophidian follower for you. 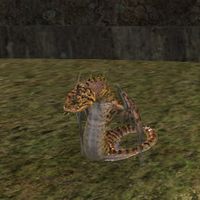 The Crested Reef Viper was available in Hollowjack Crates as an Epic-level reward. Its default name is "Spines".

Khajiit claim these torchbugs are the light of Jode given form, which allows them to dance amid the moon-sugar cane and bless the crops. Now you can have one flitting about you! After all, having Jode's blessing is never a bad thing, right? 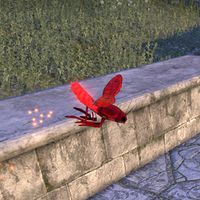 The Crimson Torchbug is a pet given as a thank you gift to the ESO community for completing the re-download of the game for Update 25. For PC, the window to from the crown store was from February 24 until March 9, and console players could claim it from March 10 until March 24. Its default name is "Massermoon", a reference to the red moon, Masser (known to the Khajiit as Jode). It was called the "Crimsonlight Torchbug" in the game files prior to its announcement as a gift.

The caramel scrib crony is a quiet companion, devoted and easily housebroken. 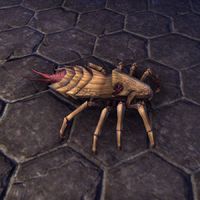 Crony Scrib pets come with the purchase of the official Fighters Guild Journeyman figure from Symbiote Studios (redeemable only on PC/Mac). Its default name is "Grubchum". The item was originally called "Pet Scrib".

†"Rufus" is Latin for "red".
‡"Sludge puppy" is a common obscenity referring to feces.
Retrieved from "https://en.uesp.net/w/index.php?title=Online:Pets_C&oldid=2365760"
Category:
Hidden categories: