This article is about the creature. For the mount, see Dwarven Spider (mount). 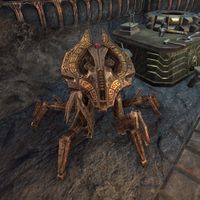 Dwarven Spiders are hostile, spider-like Dwarven automatons that can be found in Dwemer ruins. They can be encountered individually as well as in swarms.

Shocking Touch
A basic melee attack that does minor shock damage.
Double Strike
A charged melee attack that does moderate physical damage. This attack can be blocked to set the spider off balance.
Static Field
The spider charges up, emitting a shock aura around itself. Standing in it does moderate shock damage over time to all enemies as indicated by a blue circle. Other Dwarven automatons may also attempt to charge up by being near the spider, although this can be interrupted. When an enemy is charged, it glows blue and deals more damage.
Overcharge
When destroyed, the charged spider will explode, dealing moderate shock damage to all players around it as indicated by a red circle. 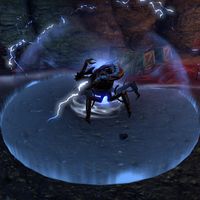 Generic, unnamed Dwarven Spiders can be encountered in various places across Tamriel, including delves, dungeons, and DLC content. These spiders have varying stats, namely health. Below is a list of Dwarven Spiders, categorized by location, difficulty and health.

This Elder Scrolls Online-related article is a stub. You can help by expanding it.
Retrieved from "https://en.uesp.net/w/index.php?title=Online:Dwarven_Spider&oldid=2524911"
Categories:
Hidden categories: