The rarest of these fay creatures is the Orchid Nixad, said to be sacred to the goddess Dibella, and found only in wild places hallowed to her worship. It's known that the Empress Tavia had an Orchid Nixad as a friend and companion. 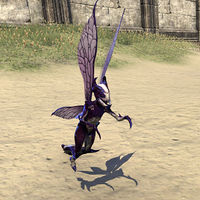 The Orchid Nixad is available as a Legendary-level reward in the Storm Atronach Crown Crates. Its default name is "Periwinkle".

One scholar studying vale fawns notes that the purple-hued Orchidfall fawn—named after a now-lost flora-filled cavern in Skyrim—enjoys eating flowers. "Give it a flower, and it's your friend for life!" Do you have your flower in hand? 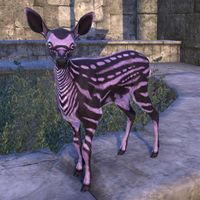 The Orchidfall Vale Fawn was the second reward in the Lost Treasures of Skyrim event, unlocked when the Antiquities threshold reached 66%. Its default name is "Nectarnuzzle".

This fastidious little jerboa originated from Orcrest, but recent events saw them scurry away or go into deep hiding among the nooks and crannies of that ill-fated city. With coaxing, one of these delightful little creatures might venture forth with you! 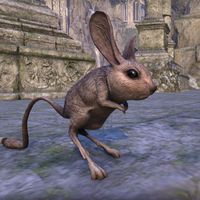 Available as a Superior-level reward in Akaviri Potentate Crates. Its default name is "Nosenibbler".

The Orcrest Rathound is an upcoming pet. Its default name is "(?)".