Though many associate darkness with evil, those looking at the Indrik come to understand that darkness is simply the absence of light—neither good nor bad in itself. A soothing thought that calms fears, much like this magical indrik does. 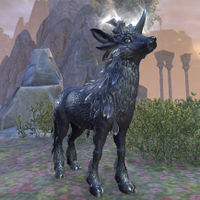 The Ebon-Glow Indrik was available from The Impresario for 000001010

during the Dragon Rise event. Its default name is "Nightbalm".

This experimental variation on the standard Brassilisk has certain key components fabricated from an Ebony alloy for enhanced durability out in the storms of the Radius. 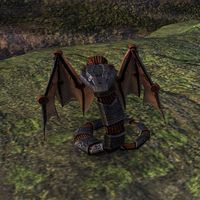 The Ebony Brassilisk is available as a Legendary-level reward in the Flame Atronach Crown Crates. Its default name is "Slithershadow".

Full-grown echateres may be stubborn and ornery, but the baby Echalettes are playful and, frankly, just plain adorable. Once a young Echalette bonds with its master, it becomes a devoted companion. 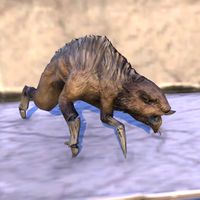 The Echalette is awarded to you as part of the DLC loyalty reward program upon entering Orsinium for the first time. Its default name is "Skitters".

"The recesses of our nightmares contain horrors that we often cannot look at. Yet we must, lest these pockets of terror fester and grow. To light your path, I present this bantam guar. Please do not squeal." — Overheard in a dark alley 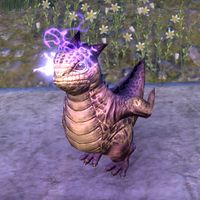 The Eerie Violet Bantam Guar is available as a raffle reward for participating in the livestreams of select ESO streamers. Its default name is "Nightguar".

A traditional gift to successful Dragon Hunters, this pup exhibits the same courage that these hunters must have, and also reminds them of the lives they're protecting with their ongoing work. 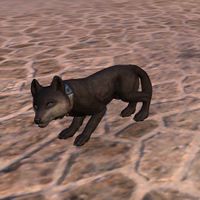 Arena Lions are trained to absolute obedience, whether as sturdy and savage Craglorn companions or as pit-fighting beasts taught to drag out a kill for the entertainment of an audience. 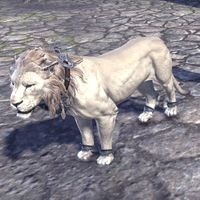 Bred for their wicked intelligence, the Emberthroat Durzog might just outwit the Netch Gouger Goblins that raised them. Only those with nimbler minds keep their loyalty—and that might just be you! 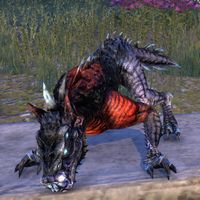 For a time, scholars thought only one type of vale fawn existed. Now, knowing better, some wonder why the variation? The fawns care not. But, ones with a green shimmer love to race. Choose one as a companion, and it might even race you!

The Emerald Vale Fawn is an upcoming pet. Its default name is "Fleetflicker".

Sparks fly with this dwarven spider! Light up your life by taking this automaton for a lively jaunt around town. It'll follow over any terrain, happily zapping away! 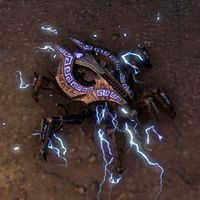 The Energetic Dwarven Shock-Spider is acquired by earning the Stonethorn Explorer achievement. This achievement is earned by entering Castle Thorn or Stone Garden for the first time. Its default name is "Zappy the Wonderbug".

A donkey might not be the most glamorous pack animal, but it's certainly the hardiest and most sure-footed, toting heavy loads through desert, mountains, and tundra without complaint … though it will give you a dirty look, and might nip if you turn away! 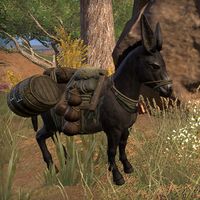 The Explorer's Pack Donkey is an upcoming pet. Its default name is "Haul Ass".