"As the fiercest of the dragonslayer wolves, this one's eyes glow a steady green, and it remains by her owner's side even against the most majestic of Dragons."—Javinda, Dragonslayer

"Sweet young things like to give this one kittens as keepsakes," says Eye of the Queen Razum-dar, "but raising a pet is not consistent with Raz's romantic but itinerant life of intrigue. Perhaps you could give cute Ja'khajiit a good home, yes?" 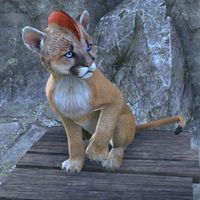 for a limited time during June of 2018. It returned to the Crown Store during 2020's Summerset Celebration event. Its default name is "This One".

The Jackal of Tamriel is called by some the "thieves' dog" because it's quick to sniff out sources of food, and clever enough to figure out how to get at them. Once tamed, they serve as loyal companions. 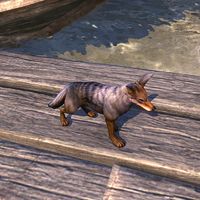 A Jackal pet is received when entering Abah's Landing for the first time, as part of the DLC loyalty reward program. It occasionally howls, digs at the ground, or catches mice. Its default name is "Mischief".

The planes of Oblivion are infinite in their variation - and so are their vermin. The Jackdaw Daedrat is a bony Daedric rodent that likes to collect shiny things like your jewelry, and nip and nibble at things it shouldn't, but at least it's cute, right? 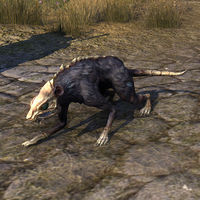 for a limited time. Its default name is "Pestiferous".

"As we people of the root know, the Hist provides. With this feathered sep adder, it gives us a creature who provides both loyal companionship, as well as keen eyesight and smell. It senses danger before its companion quite often."—Daixth

The Jewel-Feathered Sep Adder is available as part of the Elder Scrolls Online: Blackwood Collector's Edition. Its default name is "(?)".