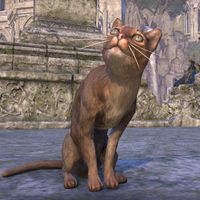 . It is now available as a reward for reaching level 24. Its default name is "Caramel".

"The cubs trained into steeds by the Potentate in 2E 23 proved so successful that this practice continues today. Seeing one melted my heart—that tail tassel! In their training barding, they walk through Leyawiin's streets each week."—Mirannah of Gwylim 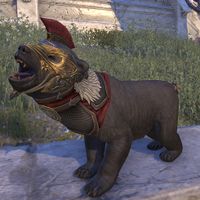 "The Potentate first mounted up on guar steeds in 2E 27 under the Red Mountain's shadow, but they trained guar calves to the saddle just outside Mournhold. One barded calf demanded nose-pats from me when I visited—I couldn't resist."—Mirannah of Gwylim 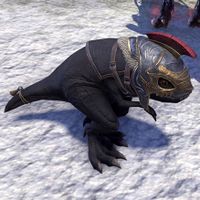 "In 2E 5, companies using the new enchanted barding designed by Versidue-Shaie's battlemages received their orders: Hunt and kill Reman loyalists. Though initially only horses, ponies and more earned the special barding and training."—Mirannah of Gwylim 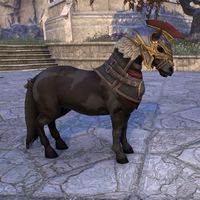 "Before heading to Skyrim in 2E 7, the Potentate had to train sabre cat cubs to the saddle. Watching these cubs pounce while wearing their training barding all these many years later almost made me lose my composure and squeal."—Mirannah of Gwylim 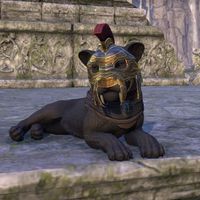 "Talking with the trainers of the wolf riders that Versidue-Shaie established in 2E 4 allowed me to see the armored pups at play. I adored how they bonelessly stretched on the ground. Hard to believe they grow to be so fierce!"—Mirannah of Gwylim

Need some happiness in your day? The Alabaster Jerboa is your answer. Its hopping and air-dancing acrobatics can bring a smile to even the grumpiest Dark Elf. 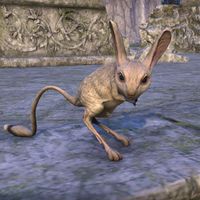 The Alabaster Jerboa was available in the Crown Store for 00700700

The Dune-Hound is the loyal dog of the Redguard hunters of the Alik'r. 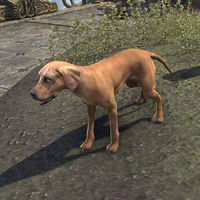 "Cute little thing, isn't it? 'Course, what I care about is that a Ringtail, properly trained, can get into places no one else can, and carry out small items in their cheek pouches. Lost goods, as it were, or misplaced valuables. Right?" —Fenaanaral 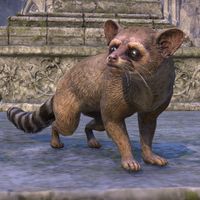 The Alinor Ringtail was available from the Crown Store for 00700700

to ESO Plus members. It is also available as a Superior-level reward in Baandari Pedlar Crates. Its default name is "Desperado".

War dogs can be found in the armies of all three Alliances, mainly in the capacity of aides to the military police. They are as loyal to their masters as they are savage to their enemies.

The Alliance War Dog can be acquired as part of the Any Race, Any Alliance Bundle. Previously available from the Crown Store on their own for 010001,000

. The appearance of the dog is specific to your character's alliance. When placed in a home, the dog's appearance depends on the allegiance of any player looking at it, so the same dog can simultaneously appear different to multiple players. Its default name is "Bruiser".

"My notes indicate these vibrantly hued watchers once inhabited the ruins of Zaintiraris until an unfortunate explorer set them free. Given their color and origin, I suspect Sheogorath holds some sway over them. Also unfortunate."—Warlock Aldaale 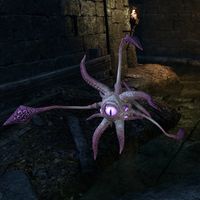 Native to the upper Ashlands and the slopes of Red Mountain, the perky Amber Ash Hopper is a favorite pet of Dunmer expatriates, as it's relatively low maintenance (it digs its own hole in the ground), and it reminds the Dark Elves of home. 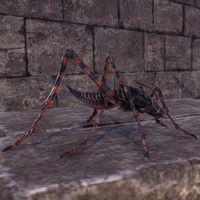 . It is also available as a Superior-level reward in Xanmeer Crates. Its default name is "Ald'Skippy".

Its amber-gold glimmer creates a warmth that one stablemaster states, "Can get you through chilly nights under the Skyrim stars." All it takes to keep one of these vale fawns at your side is a lick of honey now and again. 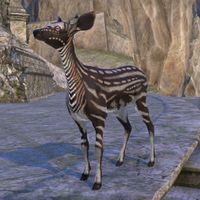 The Ambersheen Vale Fawn is available for free from the Crown Store throughout the two week long duration of the Heroes Reforged event. It was available on PC/Mac for 14 days starting March 8, 2021, and was be available for two weeks on PS4 and Xbox One starting March 16, 2021. Its default name is "Honeywine".

"The Ancestor Moths that accompany some mystically-attuned mortals are more than mere insects - they are animated by the loving spirits of the dearly departed, and may grant wisdom and awareness to those they visit." -- Sister Terran Arminus 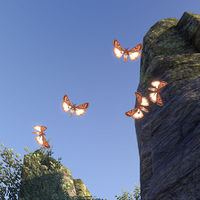 The Ancestor Moth Swarm is available in the Wild Hunt Crown Crates as an Epic-level reward. Its default name is "Fjyron", which loosely translates to "will to peace".

This wolf senses the impending arrival of Dragons, making it an excellent pet for veteran Dragon Hunters. 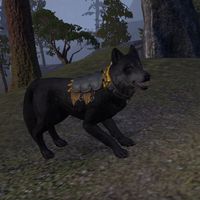 The Ancient Dragon Hunter Wolf was available in the Crown Store for 010001,000

or as part of the Scalebreaker Collector's Bundle. It first became available on August 12 for PC, and on August 27 for consoles. Its default name is "Intuition".

With this loyal dog at your side, you have a companion who can help you make it through even the most treacherous of avalanches in Pale Pass and other mountainous areas … even if it has to pull you out from under a pile of fallen snow and detritus. 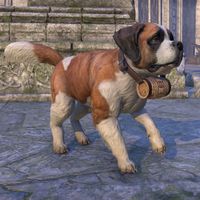 The Anthorbred Avalanche Dog is available in the Crown Store for 010001,000

The Arctic Fennec is native to the snowy shores of Skyrim's Sea of Ghosts, and the local Nords, when they spot one romping in the drifts, respond with the traditional oath of "Shor's Ears!"' 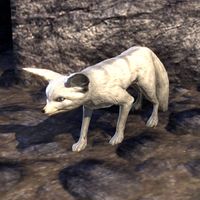 The Arctic Fennec Fox is available as an Epic-level reward in Flame Atronach Crates. Its default name is "Powder".

This bluish breed of Vvardenfell aerial reptile, known as the Azure or Ascadian Cliff Strider, is prized by flying-lizard fanciers as the prettiest and most ornamental of its species. Bonus: its screech terrifies crying babies into silence.

The Ascadian Cliff Strider was available in the Crown Store for 0000??

Legends claim the Red Mountain's first eruption not only gave brown sheep their current hue, but also imbued them with the fortitude to thrive despite hardship. Knowing their sheep remain placid while in danger, many Dark Elves believe these tales. 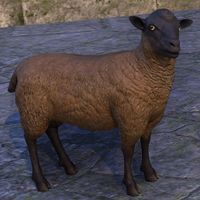 The Ascadian Umber Sheep is available as a Superior-level reward in the Grim Harlequin Crates. Its default name is "Sundeath".

The Jerboas, you say? Ah, yes, the little jumping skeevers with the so-big ears. There are many in the Ashen Scar, and if you catch one when it's small, it makes for a pleasant, fuzzy friend. I had one when I was a kitten! -Shuzirri of Riverhold 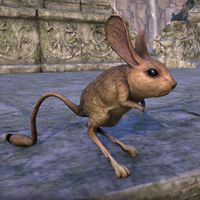 The Ashen Scar Jerboa is available from the Elsweyr Collector's Edition. Its default name is "Hopping Bob".

"A fur-less, cold-blooded reptile with icy blue eyes that comes from the frozen, far-north, and in-all-likelihood legendary continent of Atmora? Bah. I refuse to believe it." —Phrastus of Elinhir 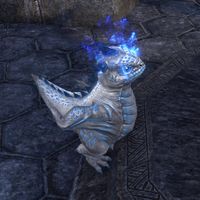 The Atmoran Bantam Guar is a pet available via code redemption after completing an survey received via email from Zenimax. Only a small number of players were contacted in this manner. Its default name is "Snow-on-Scales".

According to Nord legend, in its native land of Atmora this Chub Loon is much larger, as tall as two warriors and with a squawk that starts avalanches. It took mighty Ysgramor a day and a night to wrestle one down from Shivering Glacier. What, you doubt? 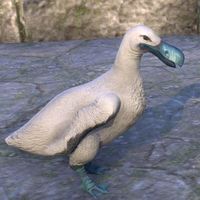 The Atmoran Chub Loon is available as an Epic-level reward in Dragonscale Crown Crates. Its default name is "Doom Loon".

When a cub, the young Atmora Snow Bear is a lap-clambering cuddle bug, a friendly fuzzball whose demeanor is completely at odds with the fierce reputation of adult Snow Bears. Enjoy them while they're still small! 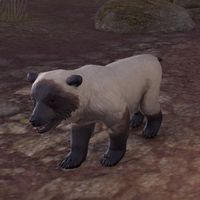 The Atmoran Snow Bear Cub is available as a Legendary-level reward from Hollowjack Crates. Its default name is "Li'l Avalanche".

Feeling festive? Let this little firepot spider follow you around! With its adorable alchemical light show, you're bound to brighten up anyone's day—including your own!

The Gryphons that nest on the highest pinnacles of Eton Nir, the tallest mountain on Summerset, have a distinctive bluish tint to their plumage. Some sapiarchs call this sky-blue camouflage, but the Priests of Auri-El see in it a touch of the Divine. 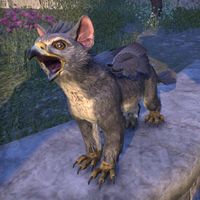 The Azure Fledgling Gryphon pet can be obtained on PC/Mac only via the use of a promotional code included with the official gryphon plush from Gaming Heads. Its default name is "Cerulean".