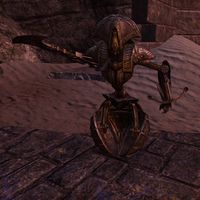 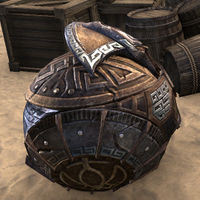 A sphere rolled up

Dwarven Spheres are hostile automatons that can be found in Dwemer ruins. They may be seen as round balls moving around, but they will unfold into an upright position to attack. When destroyed, they have a chance to drop Dwarven Scrap, which can be refined into a Dwarven Frame.

Blade
In melee range, Spheres will slash at their enemy using their blade as a basic attack.
Steamwall
A charged heavy slash, which can be blocked to set the Sphere off-balance.
Quake
The Sphere may also jump and slam itself on the ground, dealing moderate physical damage in a radius around it as indicated by a red circle.
Dart
At range, Spheres will shoot their crossbow as a basic attack.
Ricochet Wave
At range, Spheres will also charge up an attack that sends a shockwave towards the target, dealing moderate physical damage as well as staggering all players hit by it. You may interrupt this attack to set the Sphere off-balance, or simply avoid it.

Generic, unnamed Dwarven Spheres can be encountered in various places across Tamriel, including delves, dungeons, and DLC content. These spheres have varying stats, namely health. Below is a list of Dwarven Spheres, categorized by location, difficulty and health.