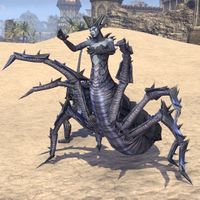 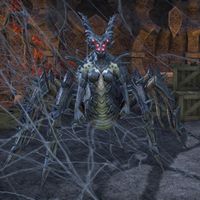 Spider Daedra are Daedric creatures that resemble a cross between a spider and a woman. They attack using a combination of ranged and melee abilities. They are usually found in the service of Mephala. There are three variants of Spider Daedra: A black-shelled model, a red-shelled model, and a model with a non-humanoid face.

They also appear in Dragonstar Arena during Round 7: The Circle of Rituals.

As they are Daedric creatures, spider daedra are especially vulnerable to Fighters Guild abilities.

Summon Spiderling
The spider daedra will usually begin combat by summoning a spiderling to assist it. The Spiderling scales with the difficulty and location of the summoner. Spider Daedra are vulnerable while a summon is active.
Lightning Storm
A spell that causes lightning to strike the webbed area, doing moderate shock damage to any player inside the red circle. If the spiderling is killed, the webbing disappears and this spell will not be cast.
Lightning Onslaught
The spider daedra may also cast a spell that sends lightning bolts forward from its body as indicated by red circles. This spell can be interrupted to set the spider daedra off balance, and will do moderate shock damage to all players hit by it.
Spit
In between casting spells, the spider daedra will perform a basic ranged spit attack that does minor poison damage.
Sticky Web
An ability that stacks a snare effect, cast by a summoned Spider Daedra, removed when the casting Spider Daedra is killed[1]
Spiderling Web
This ability is preceded by a cast animation.[2] 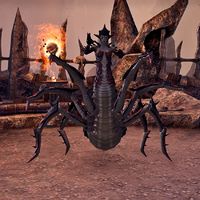