Arpenia is an Ayleid ruin located east of Fort Redmane.

A projection of the Duke of Crows can be spoken to outside, and will request your help in freeing members of the Blackfeather Court trapped within the ruins. The interior is filled with hostile Whispering Shadows cultists and various shadow creatures from the Evergloam. A cultist note can be found shortly after entering the ruin. 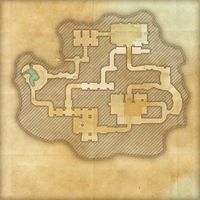 This Elder Scrolls Online-related article is a stub. You can help by expanding it.
Retrieved from "https://en.uesp.net/w/index.php?title=Online:Arpenia&oldid=2502149"
Categories:
Hidden categories: