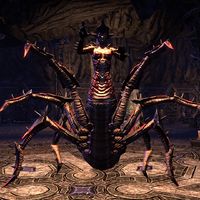 Ruzozuzalpamaz is a Spider Daedra found within the Crypt of Hearts II. She serves as the first boss the players have to defeat to progress.

Spit
A basic ranged attack that does high poison damage. If taunted, the boss will be forced to use this attack on the tank only.

Lightning Onslaught
The boss releases streaks of lightning from itself as indicated by red circles. This attack does high shock damage and thus the tank should face the boss away from the party to reduce the chance of them being hit.

Creeping Storm
The boss places a large AOE under a random player. This attack does high shock damage over time as indicated by a red circle. This AOE will move along with the player it is targeting, thus that player should lead the AOE away from the rest of the party by running a lap along the side of the room until it dissipates.

Spider Bites
The boss wraps a random player in a cocoon. This attack does moderate poison damage over time. Other party members must go near the trapped player and press the synergy key to free them.

Summon Spiders
The boss summons many spiders to attack the party. They should be killed as soon as possible to simplify the fight.

Nerien'eth: "Leave those souls―kill the intruders!"
Ruzozuzalpamaz: "Watch your tone, mortal. Blade or no, only the Whisperer commands me."

Ruzozuzalpamaz: "This is not a place for mortals."

Ruzozuzalpamaz: "Let's see if you can keep up."

Ruzozuzalpamaz is associated with four achievements: