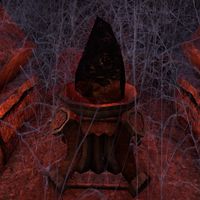 The Obsidian Husk is a magical stone associated with Mephala. In appearance it is a transparent black crystal with the Daedric letter "Oht" carved into it. The origin of the artifact is shrouded in mystery. Some believe it to be a fragment of Oblivion, having followed a visiting Daedra from that plane. Others believe it to be magical in nature, containing a trapped shred of Mephala's essence.

The Husk has formidable powers and two known functions, which were discovered and passed down by members of the Spider Cult. Additional spells may be tied to the artifact, but the Husk never stays in the possession of a single individual for long. Members of Mephala's Cult have been known to scheme and battle over it. It can create and control all manner of shades from minor shadowlings to creatures of complexity, aberrant intellect, and untold power. The most powerful Spider Cultists have found that they can use the Husk to enchant others. The afflicted are shrouded in shadow, and granted supernatural agility and strength, but lose their minds—these "shades" follow the beck and call of the Obsidian Husk's master.

The Oghma Infinium, also known as the Tome of Power, the Librum of Knowledge, and the Book that Knows, is an ancient tome of knowledge, and an artifact of great power. It was written by Xarxes, the scribe of Auri-El, who had been granted the knowledge within by Hermaeus Mora. The name of the tome comes from Oghma, the wife of Xarxes, whom he created from his favorite moments in history. The knowledge within the tome grants the reader access to the artifact's energy, which can be manipulated to achieve near demi-god abilities. The Paths of Steel, Shadow and Spirit are the three main sections of the tome. Once the Oghma Infinium is used, it disappears from its owner's possession.

The Orb of Vaermina, named for its patron, was an orb apparently used for scrying. At some point before 3E 433, it was in the possession of a wizard named Arkved, by whom it was apparently "snatched from the dreams of [Vaermina's] followers".. It was recovered by Vaermina's champion, who received the Skull of Corruption in return.

According to the Moth Priest Kellen, the Orb was used by Lord Naarifin—then in the service of Boethiah—to spy on Titus Mede II and his armies. It was recovered by the Forgotten Hero from the Emperor's chambers, who either destroyed or kept it. 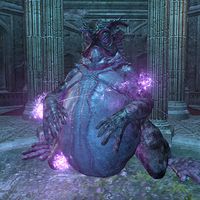 The Orbs of B'Raken Drel are three ancient matching relics believed to have originated in the Sea of Pearls. The Psijic Order long suspected they were connected to the Sea Sload of Ul'vor Kus. This suspicion turned out to be true when in 2E 582 a Sea Sload named K'Tora used the Orbs to enhance his mind magic to delve into Ritemaster Iachesis's deepest memories.[1][2]