Neb-Crescen is a cursed sword created by Sheogorath that causes its wielder to be filled with reckless abandon, compelling them to kill everyone in a fit of rage when they hold it. The 16 Accords of Madness describes it as being a seductive wide "arc of honed steel" that is intricately decorated, such as being adorned with jewels, having a beautifully decorated handle, and even having a practicality in its elaborate pommel, which is designed to balance its considerably hefty weight. It is most known for being used against Malacath to trick him into murdering his own son.

The Necromancer's Amulet (also known as the Necromancer Amulet) is a legendary artifact created by Mannimarco. In appearance it is an exquisite amulet, often with a jade skull emblazoned upon it, or sometimes carved into the shape of a tiny skull with glowing eyes. It grants the wearer magical protection equivalent to plate armor, as well as the ability to regenerate from injury, resist mundane weapons, and absorb magicka and life force. The wearer also becomes wise beyond his years and far more capable in the School of Conjuration. This comes at a price, as the amulet can drain the wearer's strength, endurance, health and stamina. The artifact is popular among both thieves and mages. The amulet is unstable in this world, and is forever doomed to fade in and out of existence, reappearing at locations distant from that of its disappearance. 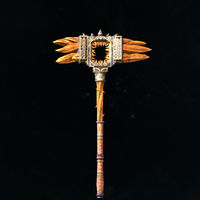 Nerveshatter is a warhammer associated with the Bosmer Lady Syl, Duchess of Dementia. It is made from madness ore and jagged shards of amber, and is enchanted to deal shock damage to those it strikes.

When threatened, the eternally paranoid Lady Syl would retreat to the ruined tunnels of Xirethard that run beneath New Sheoth and would equip herself with Dark Seducer armor and Nerveshatter. She claimed to have defeated many while wielding the hammer. Syl was killed by the Champion of Cyrodiil during the Greymarch of 3E 433, although it is unknown if she defected to the Forces of Order or if her death was part of the Ritual of Accession. In any case, Nerveshatter was claimed by the Champion. 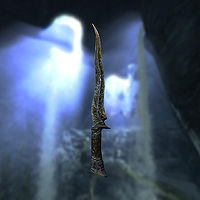 The Nettlebane is a crudely-engraved Ebony dagger that was crafted by Hagravens of Skyrim, built with the intention to harm the natural world and thus perform sacrifices on Spriggans. It has the ability to damage ancient flora older than metal, such as the Eldergleam, one of the oldest living things in Skyrim.