The UESPWiki – Your source for The Elder Scrolls since 1995
< Lore: Minerals: Crystals / Alchemy: A
Jump to: navigation, search 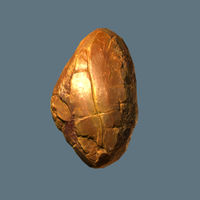 Amber (Skyrim Creation Club)
Amber, so exquisite, so pretty, like drops of fallen star dew. From your honeyed globes I would craft myself an armor that trapped me inside your beauty and warmth. I would suffocate myself in your light, and in death live for eternity.
—Evethra

Amber is a colorful resin formed from hardened sap.[1] It may be used in alchemy to produce a resist fire effect.[2] The material is of limited use to the people of Tamriel, but in the Shivering Isles, amber smithing is an ancient art. The master smith of Bliss has the ability to make amber weapons and armor. Before the master dies, he will hide matrices throughout the realm and train an apprentice to continue the tradition.[3]

Amber is common in the Shivering Isles, as it occurs in large quantities in the root tunnels that run beneath the surface. Severe trauma to the root system walls results in the formation of amber deposits as part of its natural defense mechanism.[1] Gnarls, animated plants that manage the tunnels, clear away the amber and sometimes bring it to the surface. Sheogorath-shaped amber is a rare occurrence within the root tunnels, and such lumps are known to have a strong connection to the realm.[4][5] Amber smiths can craft lightweight armor and weapons from this resin, which possesses unique qualities not found in Tamrielic amber. Amber matrices are hidden throughout the Isles to soak up the magical essence of the Realm of Madness. Using a matrix will produce an enchanted piece of equipment.[3] The quality and enchantment power varies greatly between pieces of amber equipment, and is divided into eight grades: impure, unpolished, lesser, a standard grade, fine, very fine, grand and perfect. Impure amber equipment is little better than crude fur or iron, while perfect amber equipment rivals even malachite.[6] Crafting amber arms and armaments requires a delicate hand, and runs the risk of causing a person to go mad. Moonstone is combined with amber at some point during the crafting process.[7][8]

Like many things in the Shivering Isles, amber has a polar opposite: madness ore. Lightweight amber equipment is associated with Mania, while heavy madness equipment is aligned with Dementia. The amber smith of Bliss is bitter rivals with the madness ore smith of Crucible, both of whom vie to become the master smith of New Sheoth.[9] Similarly, the two materials also align with the rivalry between the Mazken and the Aureal; amber may be used to summon or even bind an Aureal, while madness ore can be used for the same purpose with a Mazken.[10] The two materials have been combined before, a notable example being Nerveshatter, a hammer made with both amber and madness ore.[6]

One of the many tales involving one of Sheogorath's playthings involves an unfortunate sage named Uncle Leo and an unusual amber artifact, a pair of silver-framed amber spectacles. The sage wanted to understand the absolute truth of the world around him, and was granted the artifact by Sheogorath for this purpose. However, upon seeing the world through the spectacles, the sage flung himself from the highest tower in Wayrest. Although cracked from the fall, this dangerous relic became known as Uncle Leo's Spectacles and continued to plague the mortals of Tamriel.[11]

Circa 4E 201, chunks of amber and madness ore began to appear all over Skyrim in seemingly impossible locations. This was caused by the breakdown of the barriers between the Shivering Isles and Tamriel in the sewers beneath Solitude, where a manic mage named Thoron had been experimenting on the Sword of Jyggalag. Thoron arranged to deliver these exotic materials to a master arcane blacksmith named Evethra, who managed to learn the secrets of crafting with both amber and madness ore, albeit losing her mind in the process.[12][7] Both of these individuals were killed by the Last Dragonborn, who used Evethra's notes to learn how to craft with these materials.[13]

The city of Silvenar uses an abundance of amber in its architecture and overall layout. According to some folklore, the town was once a glade of completely colorful trees, but the graht-oak sap began to flow and create a web of hardened amber that became the foundation of the modern-day city. There are bridges of amber and Silvenar's architecture is sometimes described as "petrified."[14]