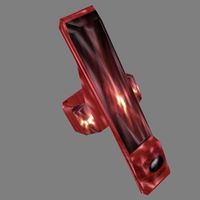 The Vampiric Ring is one of the more deadly and rare artifacts in Tamriel. It is said to have the power to steal its victim's health and grant it to the wearer. Its exact nature and origin is wholly unknown, but it's thought to have been created long ago in Morrowind by a cult of vampire followers. It is extremely rare, and is only seen every few hundred cycles of the moons.

Veloth's Judgement (also called the Judgment of Saint Veloth) is the magical Daedric warhammer Saint Veloth wielded during his exodus from Summerset. This symbol of power stood for everything Veloth embodied. Veloth's Judgment was said to have rang with authority throughout the land. Its enchantments could cleanse corruption from the souls of those it struck down.

Veloth's precision with the hammer was such that he could remove the corruption from a soul and leaving the remainder alive and healthy. The warhammer stored the corruption for a time, turning it into energy that could be used by the wielder to enhance the power of the weapon. Veloth saw fit to set aside this weapon when he vowed to turn his attention from war to the task of building a new home for the Chimer in Resdayn.

The Vengeful Eye is an amulet associated with the Daedric Prince Malacath; it is a relic sacred to both the Orcs and Reachfolk of the Winterborn clan. It is a plain amulet carved with the symbol of an eye. Dried blood appears to be caked inside the etching. Those who have it in their possession are said to carry Malacath's favor. It was first given by Malacath to his mortal followers, and this artifact would be passed down by combat, the one who slain the bearer claiming the artifact. It is capable of influencing those who have it in their possession. Two Orcish brothers once attempted to destroy the relic, only for it to whisper to one of them, and influencing one brother to betray the other. Soon after, the relic fell into the possession of Mercedene, one of the Winterborn and Beast of the Reach.

It would eventually be buried within the tomb of Honor's Rest. In 2E 582, the Winterborn attempted to retrieve the relic from the tomb, so they could march upon Orsinium and the Orcish Strongholds, in what was referred to as the Vengeful march. It would be retrieved by the Vestige before that could happen. Its unclear if the relic was given to the Priests of Malacath in Orsinium, destroyed, or if the Vestige took it to a shrine of Malacath and received Malacath's favor and blessing to keep the amulet. 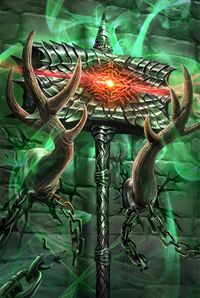 Volendrung, also known as the Hammer of Might, is an ancient artifact created by the Dwarven Rourken clan. It is known to manifest as either a warhammer of Dwarven Metal, or ebony. For unknown reasons, Volendrung became a Daedric artifact of Malacath. It earns its name with its capability to demolish even the walls of enemy keeps with ease. It is enchanted with the ability to paralyze foes to an extent that is comparable to that of a Medusa's gaze. It is also known for draining those it strikes of their strength, conferring it to the wielder. The hammer is prone to disappearing like its Dwarven creators, sometimes resurfacing in days, sometimes in eons.

The hammer originally belonged to the chieftain of the Rourken clan. When his clan refused to join the other Dwemer in the First Council, the chieftain threw his hammer across Tamriel, promising to settle where ever it landed. The hammer landed in western Tamriel, and the Rourken called the land Volenfell, literally "City of the Hammer". This area later came to be called Hammerfell. The Rourken's journey across Tamriel is depicted in many of the ruins of the region, Volendrung appearing as a shining star showing the way.