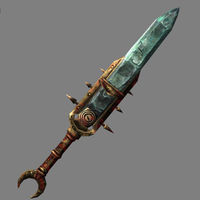 Kagrenac's Tools are the legendary artifacts crafted by the Dwemer Tonal Architect Lord Kagrenac. Each tool served a specific purpose to siphon the power of the Heart of Lorkhan, via tonal manipulation of the laws of nature.

Kahvozein's Fang is a Dragon Priest dagger that dates back to the Merethic Era. It is legendary throughout Skyrim and is known to be sharp enough to make precise carvings from the scales of a Dragon. It was created by a particular sect of the Dragon Cult, one that worshipped the eponymous Kahvozein. They were very fond of ritual sacrifices, so much so that the high priest spent much time sharpening this dagger so that it was always ready for its next victim.

King Orgnum's Coffer is a small-sized chest, ordinary in appearance. It is remarkably light, almost weightless, which offers a clue to its true magic. Once a day, the Coffer will create gold from naught. When King Orgnum himself possessed the Coffer, the supply within was limitless. Orgnum lost the coffer in a marine battle against Emperor Antiochus Septim. The results of this loss supposedly caused Pyandonea to lose its status as a world power, given that Orgnum no longer could afford as great a fleet. Those who have found it since report that the Coffer eventually disappears after having dispersed enough gold to shame even the wealthiest of merchants. Where and why it vanishes is still a mystery. It was last seen in the hands of the Eternal Champion.