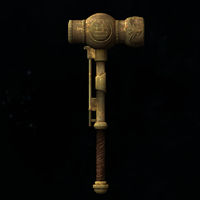 Sunder is a Dwemer artifact created by Kagrenac, one of the three tools used to siphon the power of the Heart of Lorkhan. Together with Wraithguard, it is acquired through the Legends Lost quest which has you claim them from the Sightless Vault. Tempering Sunder requires Dwarven Metal Ingot and the Arcane Blacksmith perk.

If it is wielded with Wraithguard equipped, damage of one-handed weapons is increased by 15% and stamina regeneration by 50%.

This Skyrim-related article is a stub. You can help by expanding it.
Retrieved from "https://en.uesp.net/w/index.php?title=Skyrim:Sunder&oldid=2515168"
Categories:
Hidden categories: