Large wooly beasts that are generally non-hostile unless provoked, generally found being herded across the tundra of Skyrim by giants. They are hunted for their meat and tusks. The giants produce mammoth cheese for food. Powdered mammoth tusk can be used in alchemy, but only the giants know how to grind the incredibly hard tusks down into powder, making the ingredient rare. 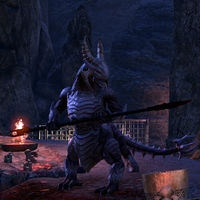 Minotaurs, also called man-bulls or bull-men, are a species of beastfolk with the body of a man and the head of a bull. During the First Era, they were said to have symbolized the Alessian Empire, but in later eras became more commonly perceived as savage monsters by the people of Tamriel.

Large tree-like creatures that can be found across Murkmire. According to Argonian folklore, they have been existed as long as the Argonians themselves. Some believe them to be the "wrath of Murkmire", while others believe the Hist sends them to teach lessons.[1]

They consist mainly of plant substance, they sometimes incorporate other materials into their shape, including mud, stone, vines, and even pieces of ancient architecture. They bear some small resemblance to lurchers and similar creatures found in other parts of Tamriel, but in all other respects they appear totally unique creatures.[1]

Every miregaunt has a large cavity in its mid-section, Sometimes an encountered miregaunt's cavity is empty. Other times a random piece of stone or other detritus fills the empty space. In rare cases, something valuable rests within the miregaunt, such as a precious stone, an ancient relic, or even a living creature. The local Argonians believe that these valuable objects have been taken into the miregaunt to purposely protect or imprison them.[1]

Mock Turtles are a rare species of giant Great Turtle that were known to exist from at least 2E 582, in a place beyond the Weir Gate.

These are a species of bright-green frogs found in the coastal marshes of Murmkire near Lilmoth. As they have no natural predators they are known to be docile and playful creatures.[2] The Moss-Foot Croaker is prized for its croaks and is used in the creation of the vossa-satl, an Argonian musical instrument.[3]

A breed of musk ox was once native to Markarth, but was extinct by the Second Era. Its large horns may have been used by Reachmen as warhorns.[4]