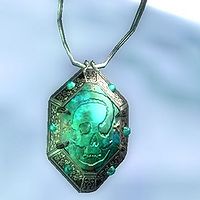 •If two copies of the amulet have been collected from Caranya, sometimes Traven will not acknowledge that the player has the amulet in their inventory and the dialogue option to complete the quest will not be available. This issue can be fixed on PC by using the console command SetQuestObject <BaseID> <0> to remove quest item status from the amulet, then dropping the duplicate amulet, then reassigning quest item status using SetQuestObject <BaseID> <1>. The base ID of the amulet must be correct to the levelled version in the player’s inventory.