The UESPWiki – Your source for The Elder Scrolls since 1995
< Elder Scrolls Online: Quests: Prologue Quests / Deshaan
Jump to: navigation, search
A junior member of the Mages Guild named Skaldir insists that he and his associates have made a significant magical discovery—one that could prove disastrous if left uninvestigated. 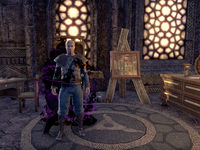 Skaldir, stabbed to death by his own shadow

When you arrive, he is busy examining a bookshelf, but turns as you approach:

"You read my letter? Oh, I'm so grateful you've come! We found something powerful. A Daedric—wait, what's happening?"

Unfortunately his explanation is cut off, as at that moment, his shadow comes to life and stabs him to death. Bonafryd runs over and cries out in frustration.

You must talk to her to ascertain what is going on. Apparently a number of the scryers have been looking into some obscure Daedric artifact. Bonafryd wants you to warn the other scryers before they suffer the same fate as Skaldir. Adeber Loumont can be found in Shornhelm, Wenridil is in Marbruk, and Neelo can be found in Stormhold.

At the Shornhelm Mages Guild, you come across Eloic Montieu. If you have completed the Mages Guild questline, he will recognize you and offer his assistance. If not, he will be somewhat wary. Either way, once you mention that his life is in danger, he informs you that Adeber has stepped outside for some quiet. You can find him behind Merethrin's House, slumped against a barrel, already dead. Collect his journal to learn more about his scrying techniques. At this point, you have the opportunity to return to Eloic Montieu to deliver the sad news. Once that is done, you can move on.

In Marbruk, Wenridil can be found on the patio behind the Queen's Residence. She moves off as you approach, accusing you of leering at her. At the same time, her shadow comes to life and starts attacking, but she manages to escape. You will need to defeat the shadow and catch up with her. Inside the Marbruk Mages Guild, Wenridil can be found hiding behind a plant pot and will cower when spoken to. She thinks that the shadow may have ripped off part of her animus, but nonetheless is grateful for your help. She directs you to another planter, where you can find her logbook and pocket it.

Neelo is tucked between some big rocks down by the river just to the east of Stormhold Wayshrine. He threatens you to stay away, saying he will not die like the others and that if you approach his wards will tear you apart. You can either Intimidate him into lowering his wards, or locate his sister Xarei, who may be able to convince him. She can be found by the market stalls in the center of the city and upon telling her the situation, you can lead her to Neelo to convince him. When you approach, she will speak with him briefly.

Captain Xarei: "Easy does it, Neelo. It is me. What troubles you this time?"
Neelo: "Egg-sister? What are you doing with that … that shadow tamer?"
Captain Xarei: "Do not be a withered root. This one means you no harm, and I am here to protect you now, all right? So lower your wards."
Neelo: "I … yes, sister."
<Neelo removes his wards as he agrees.>

Once Neelo has been convinced one way or another to lower his wards, he will direct you to his journal, located at the root of a nearby tree, so that you may take them "far, far away". If you fetched his sister, he also apologizes for his paranoia.

Once you have found all three scryers, a projection of an Altmer named Lilatha appears, speaking to you.

Lilatha: "You, who would unravel the secret of these murderous shadows. Approach me."

Talk to her, and she will explain that she is a member of the Psijic Order, and has also been looking into the same Daedric artifact that the scryers have seen. In order to find out where the artifact is located, she explains that you need to collect a Liminal Lens from the Howling Sepulchers in Craglorn, and an Anuic Lantern from a shipwreck on Khenarthi's Roost. If questioned, she will explain that they are needed to build a Psijic scrying device known as The Obscuros.

To find the Anuic Lantern, head south of Eagle's Strand on Khenarthi's Roost. Just south of a group of sailors is the shipwreck, and upon checking inside the cabin you will find an open chest and a dead bandit holding a Soggy Note. The note urges you to get revenge for the author, and that the lantern has been taken to Hazak's Hollow on the other side of the island. The lantern can be found in a freshly-packed crate on the west side of the cave, near the back.

The Liminal Lens is located inside the Ancient Priest's Coffer in the Dragon Priest's Burial Chamber at the far end of the Howling Sepulchers. From the entrance, head north along the ravine bridge, and turn to the west once you leave the cavernous passage. Again, head through a small cave and cross another bridge. From there you will need to enter another cave, and this time you will end up in a Nordic barrow. You can ignore the necromancer Rosathild pretty easily, so heading east you will need to cross yet another bridge over the ravine. Continue in roughly a straight line along the path, up the stairs, and to the Dragon Priest's Burial Chamber. Unlike before, you can't avoid the boss Akiirdal since they are directly behind the coffer. Once defeated, you can open the Ancient Priest's Coffer and take the Liminal Lens

Once you have collected both items, head to Vulkhel Guard where Lilatha's boat is waiting. It can be found on the far side of the outer harbor wall, but before boarding Bonafryd appears and rushes over.

The Isle of Dranil Kir[edit] 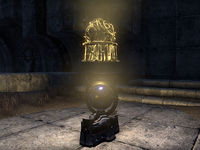 Apparently before you left Mournhold, Bonafryd slipped a coin with a tracking charm on it into your pocket. She wants to go with you, since she thinks it will be too dangerous otherwise. You need to decide whether or not to bring her along.

If you decide against it, she sends you on your way and you arrive at Dranil Kir alone and in the rain. If you agree to bring Bonafryd on the boat, she arrives with you but gets sea sick and tells you to go on ahead. Either way, head up the path to find Lilatha warming her hands at a fire as she waits for you.

Lilatha: "Campfire on the beach... I still don't see the appeal."
Lilatha: "Ah, you've arrived! Welcome to Dranil Kir. Let's get out of the rain, shall we?"
Lilatha: "I trust you brought the items I requested. The scrying chamber is just up the hill. Follow me."

She runs off up a hill and into the Obscuros Scrying Chamber, a room in some Ayleid ruins. Lilatha heads towards the podium, making idle conversation as she does.

Lilatha: "I'm confident that the components you brought will it, but the Obscuro's device has been dormant for centuries."
<Lilatha stops in front of the Obscuros.>
Lilatha: "Do you feel that chill? It's like … oh no."
<Lilatha freezes awkwardly, shadows surrounding her. She struggles, but is unable to move.>
Lilatha: "What's happening to me?"
<Lilatha's shadow appears behind her.>
Lilatha: "You must …. kill the shadow. Hurry!"

Her shadow has similar attacks to the previous one fought, and must be defeated.

Suddenly, Bonafryd calls out. Her dialogue changes depending on whether you took her with you or not, but no matter the choice she will appear and threaten the pair of you. She enters the way you came, wearing a dark, shadowy set of armor and armed with a mace and shield. It turns out she is behind the shadow attacks, and she summons another copy of Lilatha's Shadow. Lilatha cries out in despair.

Lilatha: "No! I will not perish here!"

You must defeat her in order to save both Lilatha and the device. During the battle, she yells angrily at you, and when she is close to death she cries out that she will "not fail [her] mistress". Finally, once she and the second shadow are defeated, you are able to reassemble and activate the Obscuros.

Lilatha: "Victory at last."
Lilatha: "Set the lens and the lantern in the Obscuros. Time to see what this has all been about."

Place the lantern in its housing, and mount the lens on top to rebuild it. Finally, it's time to activate it. A series of golden projections appear, starting with one of an odd creature that resembles a Clannfear.

Talk to Lilatha for further interpretation of what the Obscuros has shown you. She will explain that this is likely a serious threat to all of Tamriel, and a reward for your assistance.

If you have completed the main questline of the Clockwork City, she will instead say the threat is most likely not over.