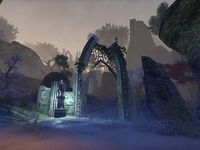 Dranil Kir is a mountainous island found off the coast of Auridon, amidst the province of the Summerset Isles. It has been an island of mystery, rumor to be surrounded by treacherous storms, and archaic traps. The island of Dranil Kir has been used by the Psijic Order of Artaeum to contain the Psijic Obscuros, a scrying device that projects a mage's perception to everyone in range. It is because of the supernatural powers of the obscuros, the island is covered in poor weather.[1] The island has described as having disappeared through magical means at one point, likely by the Psijic Order.[2]

During the Interregnum in 2E 582, the Psijic Obscuros and the island of Dranil Kir were under the supervision of the Psijic Master of the Gazing Glass, Lilatha. At that time, the obscuros was scattered centuries prior, in the hopes that a malevolent force would not use it for their own purposes. Ever since then, the island has been surrounded by harsh sea storms, a side-effect of its destruction.[1] Sometime around the Planemeld, people's shadows were coming to life and killing their source. The Psijic Order decided to investigate and acquire the help of the Soulless One, to rebuild the Psijic Obscuros, with the Liminal Lens and the Anuic Lantern. With the needed materials, the two traveled to Dranil Kir, but were ambushed by an agent of the Court of Bedlam. The agent was defeated and Lilatha commenced with the obscuros ritual. In her visions, she saw the Clockwork City. The Psijic Master left Dranil Kir to report to the order on Artaeum.[3]