This article is about the group events. For the DLC, see Harrowstorm.

A Harrowstorm from a distance 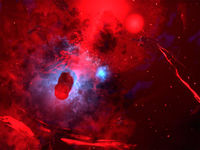 The reliquary at the center of a Harrowstorm

Harrowstorms are "giant supernatural confluxes" which plague Western Skyrim and the Reach. Much like Dark Anchors, Abyssal Geysers and Dragonscours, Harrowstorms function as group events, where a number of players must work together to shut the Harrowstorm ritual down.

Only one Harrowstorm per zone can spawn at once, and the order is selected randomly; the same Harrowstorm can spawn multiple times in a row. Western Skyrim, Blackreach: Greymoor Caverns, and the Reach are on separate spawn cycles. You can tell if a Harrowstorm has recently spawned as it will lack the camp in the center; otherwise, you will meet three travelers gathered round a fire. These people will be killed when the storm spawns. You can tell when a Harrowstorm is about to begin by the red mist that begins to gather, and once the storm begins it can be seen from far distances.

You must destroy the three Witch Pikes in the midst of the storm; each pike draws in Lost Souls, which will heal the pike if they are allowed to reach it. You will need to destroy all three pikes as quickly as possible to prevent the reliquary at the center of the storm from summoning ever greater monsters. In addition to the high number of enemies, the storm above can cause AoE damage via red lightning strikes, sometimes resulting in instantaneous death if you aren't looking where you're standing. Once all three pikes are destroyed, the boss will spawn in the center of the ritual site. Once the boss is defeated, a pile of "Reliquary Remnants" will appear in the center and can be searched for loot, but be careful as you approach as the storm will discharge a few more lightning strikes before it dissipates. Matron Jagiska taunts you throughout the fight. 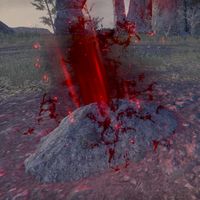 Reliquary Remnants, which appear after a Harrowstorm is stopped

A wide variety of items can be looted from the shattered Gray Reliquaries. Notable items include:

You will encounter several quest-related Harrowstorms during the following quests: