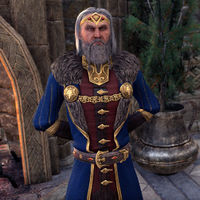 High King Svargrim is the Nordic Jarl of Solitude and ruler of Western Skyrim. His wife is Queen Gerhyld and they have a daughter called Svana. He is a dour man and has little love for outsiders; in particular, there is bad blood between him and Jorunn the Skald-King to the east. This is partly because of the generations-long conflict after Skyrim was split into two kingdoms, and partly because he sees Jorunn's involvement with the Ebonheart Pact as a sign of aggression towards his kingdom.

As such, he has a deep suspicion of anyone linked to the Skald-King, which makes convincing him of a threat to his kingdom a difficult task. 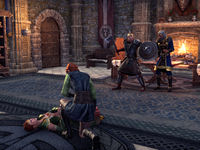 When you return from Kilkreath Temple to report to Queen Gerhyld with proof of the Coven threat to Western Skyrim, you will find the mood somber within the Blue Palace. Queen Gerhyld was mortally wounded by an assassin and High King Svargrim sees your presence as an insult and wastes no time in blaming you and Lyris for his wife's death.

Svargrim is seething when he addresses Lyris.

After searching the area for clues left by the killer, Lyris will insist that you speak with Svargrim to convince of the threat. Once you're inside, you will find King Svargrim standing by the fire: 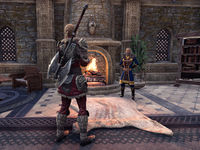 You can then speak with High King Svargrim for the first time, the meeting will go poorly.

"Does Jorunn think me so weak that he believes his half-giant can twist my arm and fill my head with lies?
I am not so easily duped, outsider."
It's not Jorunn you need to be concerned with. It's the Icereach Coven.
"Reach witches? They pose no threat! We've beaten back those wild dogs time and time again while our brothers to the east bow down to a poetry-writing milk-drinker!
I will not be lectured on such matters by the likes of you!"
Have you heard about the harrowstorm that struck Kilkreath? It turned your people into harrowfiends.
"Tales told around campfires to scare the children! Storms happen here all the time, and none of them spawn monsters. The last spy who spoke of such things … well, he no longer speaks of such things.
I am the Wolf of Solitude, I know my enemies."
Queen Gerhyld asked us to bring you proof. That might be why the coven killed her.
"You dishonor my wife's name by letting it pass through your treacherous lips? Away with you!
And pray I don't find evidence that ties you to the queen's murder. That would not go so well for you."

With those final words, you can leave Svargrim's presence. 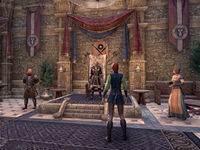 Svana attempting to persuade her father

When you enter the Blue Palace and go to the throne room upstairs, you will witness the end of the meeting between father and daughter. It does not go well at all.

Svargrim will leave without another word.

After Svana convinces Swordthane Uthlet to allow you take one bottle of Arkay's Sacred Oil for the harrowstorm elixir, Svargrim will arrive outside Castle Dour.

If you try talking to him he will curtly say:

"Away with you. We're much too busy for Svana's frivolous notions."

After testing the elixir at the Undergrove and learning of the Gray Hosts plans for Solitude, you can return to the Blue Palace to convince Svargrim of the elixir's success. When you arrive you can tell that it hasn't been going well.

Jarl Reddharn: "Listen to your daughter, Svargrim. We need to do something."
High King Svargrim: "Don't test me, Reddharn. I know exactly what I need to do."

You can then try talking to him.

"Our enemies circle ever closer, and now even my daughter turns against me. What's next? Will my beloved wife return to accuse me of some heinous crime?
Well, get to it. Tell me about Svana's miraculous elixir before I have the lot of you tossed out."
The elixir works. Svana tested it herself and withstood a harrowstorm.
"You represent my most hated enemy and expect me to believe a word you say? Even if you speak true, worms have found purchase in the wood and seek to rot my kingdom from within.
I will not let Solitude and the western holds fall."
If you can't trust us, at least trust your daughter.
"Trust Svana? Perhaps ….
No. No! Your honeyed words are but echoes of my most obstinate foes. You offer a miracle with one hand while holding a poisoned dagger in the other!"
We only want to help. 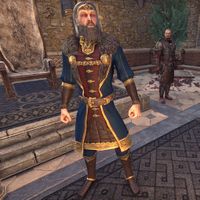 Svana will make a last ditch attempt to convince her father.

High King Svargrim: "Help? I need no help from the likes of you."
<Svana holds out the bottle of elixir.>
Svana: "Don't be a fool, father! This elixir will save our people!"
<Svargrim turns around.>
High King Svargrim: "I didn't think you had it in you, daughter. You have actually surpassed my expectations. More's the pity."
<Svargrim snatches the bottle out of her hand.>
High King Svargrim: "And I'll hear no more talk of this miracle elixir."
<A flash of red covers Svargrim's body and his complexion and eyes show him to be a vampire. Svana is thrown back and Svargrim breaks the bottle.>
Svana: "Father, no!"
High King Svargrim: "The Gray Host is my true ally! Once the harrowstorm engulfs Solitude, my kingdom will endure for all eternity!"
<Svargrim turns into a cloud of bats and disappears.>
Fennorian: "I should have sensed it … Svargrim's a vampire!"
<Svana staggers over to the dias and sits.>
Lyris Titanborn: "Svana …."
Svana: "Not now, Lyris. I … I need to think about this."

After Svargrim disappears, there will soon be reports of harrowfiends and vampires emerging from Castle Dour and capturing the Tower of the Wolf. When you arrive there will be some discussion about the lack of witch pikes in the city before Fennorian realizes that the Gray Host entered the city from Blackreach. Soon your group will find Greymoor Keep located directly below the city and you'll need to search for Svargrim once inside. Eventually, you'll locate him immediately after learning about the true function of the tower with Fennorian:

Svana: "There they are!"
Fennorian: "Lyris, Svana! I think this entire tower functions as a witch pike!"
Lyris Titanborn: "What? Fenn, how is that even possible?"
<Svargrim's voice can be heard as he cries out in pain.>
High King Svargrim: "Argh! The energy … it burns!"
Svana: "That's my father. This way!"
<The group begins running towards the voice.>

They will stop when they reach a balcony overlooking a massive witch pike, a beam of red energy shoots from the top while Svargrim and Rada al-Saran stand facing each other.

Rada al-Saran: "Pain is part of the process, Svargrim."
High King Svargrim: "It's … exquisite … my master!"
Rada al-Saran: "Once you are attuned to Greymoor, the storm will be yours to command."
<The attunement of Svargrim is completed and he begins to rise up in the air and floats towards the surface.>
Rada al-Saran: "Rise, Svargrim, and unleash my storm upon Solitude! Then the last of the Gray Host shall be reborn!"
<Rada then follow him to the surface.>
Fennorian: "The Ashen Lord, he turned Svargrim into the heart of his harrowstorm!"
Svana: "They're moving higher up the tower! We need to follow them!"

You will need to climb the tower to reach Svargrim despite the barriers placed in your way by Rada al-Saran. Once you reach the Upper Keep the tower will begin to shake and there will be waves of dark red light as Svargrim's attunement reaches completion. Svana and you will see him once more as you climb:

High King Svargrim: "You abandon me, in our moment of triumph? What game do you play, Rada al-Saran?"
Rada al-Saran: "Game? I gave you power. If you can't conquer Skyrim, the fault is your own."
Svana: "This place is connected to Castle Dour! How long has my father been planning this?"
Rada al-Saran: "Now ascend to your Tower of the Wolf and unleash my most potent harrowstorm! The Gray Host is counting on you, little king."
<Svargrim rises up out of sight.>

By the time you reach Solitude, the harrowstorm will have begun as people die or literally dissolve into energy which is absorbed into the storm. You and Svana will head to the Tower of the Wolf to confront Svargrim while Lyris and Fennorian hold the harrowfiend swarms back. 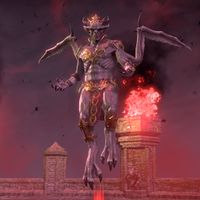 Svargrim can be found standing in the center of a web of energy which follows the metal ritual circle forged into the floor. He will mockingly welcome Svana as he sees her.

Svargrim: "Ah, daughter. Come to bear witness to my ascension?"
Svargrim: "Rada al-Saran has given me power beyond anything you can imagine. Behold!"
<Svargrim transforms into a massive Vampire Lord>.

During the fight he will fly out of reach at times and awaken the Gargoyles to attack. He will also become a swarm of bats which will attack you directly. Eventually as he approaches death, he'll become a cloud of bats and harrowstorm energy.

High King Svargrim: "No … how is this possible?"
Svana: "Father! Why did it have to come to this?"

You can then motion for her to toss the potions Fenn gave her at the cloud. Svargrim will be forced to reform, where he'll be dazed and unable to attack.

Vampiric Grip
The vampire lord transforms into a cloud of red mist and bats and enshrouds a target, draining their health for seven seconds. The target must break free to cease the assault.
Summon Harrowfiends / Awaken Gargoyle
Three bolts of red lightning strike at the edge of the arena, summoning three harrowfiends. When you kill a harrowfiend, its essence is absorbed by one of the gargoyles beneath the braziers surrounding the arena. When a gargoyle absorbs three bloody essences, it awakens.
Talons
Melee attack which causes physical damage.