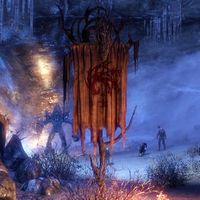 This article is about the faction. For the final boss fight in Icereach, see Icereach Coven (Boss).

The Icereach Coven are a group of witches who are based in the island fortress on Icereach, led by Mother Ciannait. During the rule of the Longhouse Emperor Leovic, they served as his advisors until they were driven out of Cyrodiil during Varen's Rebellion along with the rest of the Reachmen. They were further chased out of Skyrim, forcing them to return to their island home.

In recent times, they drew attention to themselves with the unnatural storms brewing on the Sea of Ghosts. The Nord forces sent to investigate quickly found that the Coven had regained strength and the patronage of an unknown benefactor.