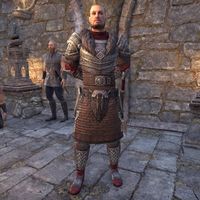 Swordthane Uthlet is a Nord and the personal guard of High King Svargrim. He accompanies the high king wherever he goes, and is usually found in the Blue Palace.

You will first encounter Swordthane Uthlet at the king's side in the palace after the assassination of Queen Gerhyld.

Svargrim is seething when he addresses Lyris.

After you investigate the murder scene, Lyris will want to speak with Svargrim. Uthlet will be guarding the door.

Swordthane Uthlet will be on the right side of Svargrim while he holds court. After Svana's failed attempt to convince her father of the threat to the holds, he will escort his king out.

After going to High Priest Ingurt to collect Arkay's Sacred Oil for the harrowstorm elixir, you'll learn that Swordthane Uthlet had already taken the supplies to the Temple of the Divines by order of Svargrim. The swordthane can be found outside the doors of the temple with crates of the oil. Svana will approach him:

Try and convince him.

"I don't have time for the princess's proclivities right now. The high king … we can barely keep up with the multitude of tasks.
So, speak quickly and let me get back to it."
The high priest said you took all of the sacred oil. The princess needs some of it.
"My orders from the high king were clear. Stockpile the entire supply of sacred oil in the Temple of the Divines, here within the confines of Castle Dour.
What in Shor's name does the princess need with holy oil, anyway?"
There's an elixir that protects against harrowstorms, but it requires the sacred oil.
"Protection? Truly? The harrowed already outnumber my soldiers, and more arrive every day.
Still, giving you the oil would violate the high king's edict. I suppose if I happen to look the other way for a moment, I won't notice if a flask disappears."
I understand.

Speaking with him again, he'll will be irritated that you are still talking to him:

"Shor's cold nose! Take what you came for and be done with it already!"

When you take the oil, the High King will arrive wanting to know why progress has slowed:

If you talk to Uthlet afterwards:

"You try my patience. Take the princess and leave here immediately."

Once you have tested the elixir at the Deepgrove, you will return to the Blue Palace to help the others convince the High King. Swordthane Uthlet will be standing at his right. Talking to him before Svargrim:

"Speak your piece to the king and be done with it. I need to clear the hall."

After High King Svargrim has revealed his true allegiance to the Gray Host, Uthlet will be in shock:

"It must be some sort of trick! The high king would never betray us … would he?"

After you have spoken with Svana, an injured Solitude Soldier will run up the stairs with a report from Castle Dour:

Solitude Warrior: "They've taken it! By the gods, it's fallen!"
Lyris Titanborn: "Fallen? What are you talking about?"
Solitude Warrior: "The Gray Host, they came out of nowhere! Captured the temple and the Tower of the Wolf! We're locked out!"
Fennorian: "Then the sacred oil …."
Swordthane Uthlet: "Damn it all! I need to get down there!"
<Swordthane Uthlet runs down the stairs and outside.>
Svana: "Follow him! Now, soldier, tell me exactly what happened."

When you find Swordthane Uthlet, he will be with one of the dead warriors as others futilely beat their fists on the red barrier covering the doors to the temple courtyard.

Talk with Swordthane Uthlet to see what he has learnt.

"I apologize for that display. Tell the princess … tell her it won't happen again.
You need to understand. I pledged my sword and my soul to the high king. We all did. And he betrayed us!"
Do you know what they're doing in there? We need to get inside.
"Nothing good, I'm sure. The Gray Host appeared out of nowhere and cut down my soldiers. Only a handful were able to escape before they sealed the gates.
Svargrim made us fortify the entryways. The bastard knew he'd lock us out."
There's no other way to get in?
"Not that I can think of. But what does it matter? Svargrim brought the Gray Host down upon us. He's bringing a harrowstorm!
We need to evacuate the city while there's still time. Some of us will survive if we flee now!"
You want to abandon Solitude?

At this, Svana will disagree with what he said. Listen to the group's discussion.

Svana: "That's unacceptable, swordthane. If we can't get the sacred oil to make more elixir, then we have to stop the harrowstorm."
Swordthane Uthlet: "Princess, we've kept watch. There aren't any witch pikes around the city."
Svana: "Then you missed something. They needed the witch pikes for every other harrowstorm they summoned."
<Fennorian holds his finger up as a thought occurs to him.>
Fennorian: "Of course! Blackreach! The Gray Host must have gained access to the temple from beneath the city!"
Lyris Titanborn: "They could easily hide the witch pikes underneath our feet."
Fennorian: "We know the Gray Host has been using Blackreach to clandestinely move around Western Skyrim. Why not launch their attacks from there?"
Svana: "Then we're going back to Blackreach. If the witch pikes are there, we'll destroy them."

"Blackreach? Suddenly every legend and camp story from my youth has returned to haunt us!
While you and the others charge into that damn abyss, I'll prepare the city. We'll do what we can to keep the people safe."
What do you have in mind?
"I'll rally my remaining solders and organize the city guard. We'll get everyone into the Blue Palace and defend them from there.
I know it won't protect us from the harrowstorm, but we'll be able to hold off the Gray Host if they decide to attack."
Good luck, swordthane.
"And you as well. Find those damn witch pikes and destroy them before we're all turned into mindless husks—or worse!
And keep the princess safe. We need her."

In the aftermath of the harrowstorm over Solitude and Svargrim's death, Lyris and Fennorian will ask you to check up on Swordthane Uthlet who was protecting people in the Hall of the Dead. When you arrive, the swordthane and Jarl Reddharn will be pleased to see you.

Jarl Reddharn: "Hah! Good to see you aren't raising mugs with Ysmir just yet."
Swordthane Uthlet: "We saw the storm break, but we heard nothing since you departed for Blackreach."

You can talk with both of them to learn what happened while you were gone.

"We seem to have survived, thank the gods.
I thought for certain we were about to witness the end of the world."
It looks like Solitude weathered the storm.
"No thanks to Svargrim, damn his eyes! After you and the princess went off to Blackreach, I gathered whoever we could and made our stand here in the Hall of the Dead.
I'm just glad we don't have to be permanent residents."
So no major casualties?
"Far fewer than I feared when the storm began. Thanks to you and the princess. With the storm over and the Gray Host driven from Castle Dour, my soldiers will get the city back into shape.
As long as no one else attacks us in the meantime."
I'll leave you to it.

Talking with him again, Uthlet will talk about how Svargrim once was.

"I—when I first pledged myself to the Blue Palace, I never thought I'd have to defend my city from its own king."
How long had you served Svargrim?
"Practically my whole life. I served in his army when we drove the Reach-dogs back from our gates. The Wolf chased them halfway over the Druadach Mountains before he declared the campaign finished. He was a man to be feared and admired."
What changed?
"I don't know when the rot in him started. It crept so slow I never noticed it, not before it was too late. At some point he became more concerned with holding onto his kingdom than the kingdom itself."

After you have spoken with both of them, a Solitude Warrior will run in with important news.

Solitude Warrior: "They're here! They're at the gates!"
Swordthane Uthlet: "The Gray Host? I thought we were done with them for now!"
Solitude Warrior: "Not the Gray Host. The Skald-King! With an army from the east!"
Swordthane Uthlet: "What treachery is this?"
Jarl Reddharn: "To the gates! We'll give the Skald-King a proper welcome, one way or another."

Talking to Swordthane Uthlet after this, he will immediately be suspicious of you.

"Svargrim was right to fear you envoys from the east!"
I have no idea what's happening here.
"That either makes you a fool, or it makes us fools for trusting you!"
Jorunn sent us here to help. I don't believe he'd turn on you now.

"I'm not in a trusting mood, but I hope you're right.
Let's go see what the Skald-King wants."

We won't know until we find out what he wants.

"I owe you for what you've done, but if I have to raise my sword against you to defend my home, I will.
All right, let's go see what the Skald-King wants."

"So this is the Skald-King? He's not the prancing dandy I expected, but if he wants a fight we will give it to him."

After you have spoken with King Jorunn, Svana will arrive. If you talk to Uthlet before Svana, he will admit that they may be too suspicious of good intentions.

"Maybe we are being foolish. We've been seeing enemies around every corner for so long we don't know what an ally looks like anymore."

Once you have spoken with Svana, Uthlet can accept the peace for now.

"Clasping arms with easterners. There's been enough death for one day."

Soon you will need to go to the Blue Palace courtyard to attend the mourning, Swordthane Uthlet will be among the crowd.

"The Skald-King welcomed to the Blue Palace with open arms. Svargrim would be spinning in his grave, if he had one."

Talking to him after the send-off of the departed, you can ask what he'll do now.

"Princess—Jarl Svana reminds me more of the queen every passing moment. We're in good hands, I think."
Will you serve her as you did Svargrim?
"I'll pledge myself to her, if she'll have me. I was fool enough to follow Svargrim as long as I did, so it's more than I deserve."
He had many fooled.
"He did. But I was by his side day in and day out. If anyone should have seen what he was becoming and put a stop to it, it was me. I owe a lot to Solitude for my failure. If Svana allows me to repay it, I'll be glad."