Oddoaks were massive, ugly shape-shifting beasts that Y'ffre ordered the Bosmer to slay in the Merethic Era. Their teeth are similar in size to Swamp Leviathan fangs.[1]

Ogres are large, seemingly dim-witted humanoids found throughout Tamriel. Best known for their great strength and foul smell, ogres have steely blue or greenish skin, pronounced teeth, and elven ears. They have shaggy white hair, which can cover the entire body of those found in colder regions. 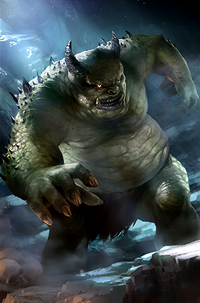 Ogrim (or Ogrims) are large dim-witted Daedra with very little intellect, which are describable as "fat-faced ogres". They are chiefly sent into the mortal world to menace living things for the amusement of Daedra Princes. Ogrim are associated with Malacath. They are sturdy and powerful, and can regenerate health by pounding their chests. Many of them wear nipple piercings. Sanguine uses ogrim as bouncers for his parties. Ogrim are also known to serve Molag Bal and Mephala. Molag Bal often employs them as guards and torturers. The lumbering ogrim is cruel, often entertaining itself by tormenting its underlings. 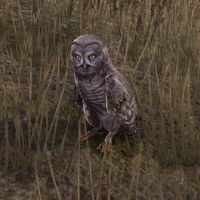 Owls are nocturnal birds found in Tamriel. The Owl known as Wise-Wing is associated in northern Tamriel with the god Jhunal, who is sometimes compared to Julianos.[2] A rare species known as the burrowing pixie owl lives in western Tamriel.[3] The ancient Clan Ruskahr of old Orsinium was known as the Owl Clan, and they revered snow owls.[4] The eluvein, or hilas owl, abandons its eggs after laying them. The Altmer use the term "eluvein" to describe people who are cold-hearted or aloof.[5] The owl is one of the ancient Nords' totem animals.[6] Druadach Snow Owl feathers are used exclusively by the Reachfolk to fletch their arrows.[7] 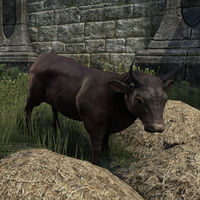 Oxen are common beasts of burden on Tamriel. They are raised for their meat.