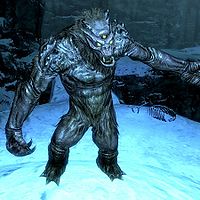 The Udefrykte (also spelled Uderfrykte or Udyrfrykte) is the name given to a legendary troll. Initially thought to be unique, there are now three known trolls that have been recorded in history under this name, raising the possibility that it is in fact a rare species. Two normal (but still ferocious) ones are presumably the spawn of the Uderfrykte Matron, also known as the Horror of Dive Rock: 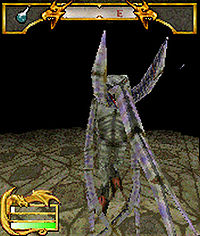 The Umbra' Keth, or Shadow of Conflict, was an entity created by the War of Bend'r-mahk. The monster was sought by Jagar Tharn and Pergan Asuul for their own ends. The creature was destroyed by the "Soul of Conflict", an unknown hero wielding the seven Star Teeth. 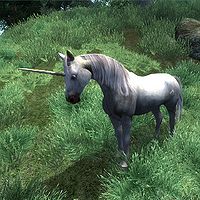 The Unicorn is a mythical creature that is native prey to the Hunting Grounds, the Daedric Prince Hircine's plane of Oblivion. They resemble a white horse with a sharp horn, which curves slightly and has a delicate spiral pattern. It is commonly described as made of pure alabaster ivory, however in some cases, it can be identified as silver. Although they can be found in the Hunting Grounds, an aspect of Hircine known as Alrabeg the Hunter brings these creatures into the mortal plane of Nirn, to hunt them in new forests. It is said that the Unicorn possess great agility, with the ability to jump over nine-feet and fly in the air, despite lacking wings. They are also described as the "brothers of the wind", wielding great speed that is faster than a Dragon.