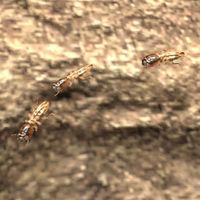 Small insects that eat and nest in wood. Termite mounds can be found in the deserts of Elsweyr, as well as the regions along the border of Elsweyr and Valenwood. 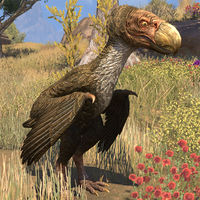 Terror Birds, also known as Khrasaat in Ta'agra, are large, carnivorous and flightless birds found in Elsweyr. They are very aggressive towards anyone who approaches them or their territory. Terror Birds have a communal nature when it comes to looking after their young and eggs with pack-like behavior, and will attack anything that comes near the nest without hesitation. Terror Birds are also extremely strong and are seen as a challenge by Khajiit warriors, in which the warriors die almost as often as they win against the beast, they have also been recorded taking down a Senche-Cat. Their diet consists of meat, from animals such as antelope and sometimes men and mer, though the Altmer mistakenly seem to think that a Terror Bird's diet consists of only moon-sugar plants. 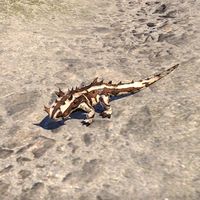 A type of gecko that is found in the desert and covered in sharp thorns that serve as a form of defense. They move quickly during the day when they hunt insects. At night, they are more sluggish and tend to search for warmth.[1] 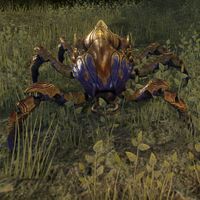 Thunderbugs are arthropods that are imbued with electricity, which they can use to defend themselves and their nests. They congregate in packs to feed off of their fellows' elemental energy.[2] Thunderbugs get their name from the shock they deliver when they bite. They can also spit tiny shock balls and call thunder from the sky to attack. They usually keep to themselves, and nest in soft dirt near trees and under ridges. They are fiercely protective of their eggs, which are sweet and feel tingly when swallowed.[3] Thunderbugs hatch as maggots, which are essential in eliminating the more dangerous poisons in Rotmeth during the brewing process. Thunderbug hearts are also used to brew Rotmeth, as they give the brew a signature tang.[4] The thunderbug's carapace, mandibles and chitin can be used to make a variety of goods.[5] 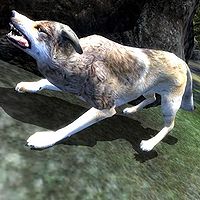 Native to Cyrodiil, timber wolves are larger and stronger than ordinary wolves. The giant Doom Wolf was originally bred from timber wolves taken from the southern Jerall Mountains.[6] 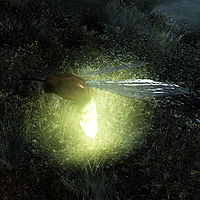 Torchbugs are small, nocturnal insects that are found all over Tamriel. They are prized for the usefulness in crafting potions. Bosmer catch torchbugs and dry them out to be smoked in pipes.[7] Torchbugs can be encased in amber and enchanted to create a handy light source that fits in one's pocket.[8] Torchbugs are attracted to the nocturnal flowers that feed from graht-oaks, and often build their hives near those flowers.[9] Some Bosmer also believe that being followed by a friendly torchbug is a sign of good fortune.[7] Similarly, the Khajiit believe that crimson torchbugs are the light of Jode given form, and that they bless moon-sugar crops as they flit around them.[10] These crimson torchbugs are also known to thrive in Murkmire.[11] 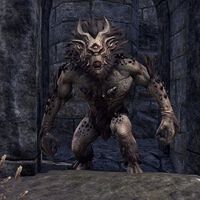 Trolls are large, ape-like, dim-witted humanoids endowed with three eyes. Their powerful arms and claws deal massive physical damage. Trolls regenerate themselves quite quickly, an ability that is only annulled if exposed to fire. In some cases their regeneration prevents their death completely, making the scorching of their corpses the only way to truly kill them. Trolls are found all over Tamriel, mostly in caves and forested areas. The Frost Troll found at higher elevations is a stronger cousin of its lowland variety. Other varieties include Swamp Trolls, River Trolls, Cave Trolls, Forest Trolls, and Lowland Trolls. Weak trolls are sometimes known as Trollkin. Trolls are known to sometimes grow to tremendous sizes, and were much larger and more powerful during the chaos of the Dawn Era.

Turtles are shelled reptiles found in Tamriel and Thras. They are able to swim and can float up to the surface of water.[12] Newborn turtles are considered quite meek.[13] The Sload slaughter and revive various sea creatures such as turtles and crabs to keep as pets.[14] Turtle stew is a slow roasted dish.[15]

Some are said to have summoned giant sea turtles to aid them in sailing.[16] Haj Motas[17] and the Mock Turtle are considered to be related.

Argonians have many sayings related to turtles, such as that one with a "turtle-heart" is "Hard on the outside, but soft on the inside".[18] Another phrase is "The turtle walks slowly and wears armor on her back. Her soul is cautious, just as her body is cautious."[19] Vanus Galerion likened the Psijic's policies to a "bemused turtle" that lumbers along quietly, only occasionally poking its head above the grass to check for danger.[20]

Turtle seed dolls with amber inlays by the Bright-Throats are highly sought after, both as protective talismans and works of native art; Bright- elders contend that the turtle is a powerful and unruly totem—one that sees both the very old and the very new with perfect clarity.[21][22] Turtles carved out of amber by pre-Duskfall Argonians fetch a high price from collectors.[23]

Turtle imagery is common in Hlaalu and Argonian furniture.[24] Turtle clasps crafted in the Breton style are considered cultural items. Terrapin-shell lanterns are fashioned from a polished turtle shell and lined with copper leaf.[25] Gemstone Chess Sets of 16 malachite Bosmeri pieces and 16 tiger's-eye Khajiiti pieces are mades with a turtle-shell board that folds into a box.[26] Turtle shells are often used to craft dishes, such as platters.[27] Insulated mug for hot beverages are made of turtle shell inlaid with a mother-of-pearl epigram.[28]