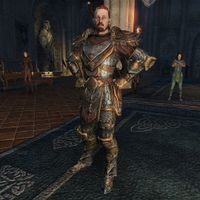 Prince Irnskar is the Nord son of Jorunn the Skald-King, and nephew of Fildgor Orcthane. He is often found accompanying his father. At first, Prince Irnskar seems prejudiced against the Dunmer and Argonians of the Ebonheart Pact.

Speaking to him in the temporary council house in Windhelm:

"Why my father continues to cater to these … foreigners … baffles me."
You don't support the alliance?
"I support the Nords. Let's leave it at that."

Speaking to him at Fort Amol after saving his father, before or during The Pride of a Prince:

"The Champion of Windhelm?
It takes more than winning a foot race and play fighting to make a true champion. A silly title. That's all it is."

Prince Irnkar will arrive in the Jarl's Manor after Dhalen has been dispatched and Naryu has told you that she saved the ambassadors. You need to speak with him to end the quest.

"Where's my father? What did our so-called allies do to him?
I'll kill every single Argonian and Dark Elf myself if my father's been harmed!"
It wasn't the Argonians or the Dark Elves. It was Fildgor Orcthane.
"Fildgor might have driven the blade, but the Dark Elves and Argonians did nothing to protect my father!
Now where is he? Tell me!"
He's upstairs. A Dark Elf and an Argonian are protecting him.
"Guards, go to the King at once!
As for you, what's your involvement in all this? Why are you here?"
Fildgor's agents tried to kill me, too.
"Then we are allies. For now.
I must go to my father. I don't care how we do it, but his life must be saved. My father can't die. Fildgor will not win this war! Not this way! I forbid it!"

You will find him again at Mistwatch.

Prince Irnskar: "Why does my father still sleep, priest?"
High Priest Esling: "Our healing magic maintains his life, but the Daedric poison is strong. I'm not sure we can overcome it."
Prince Irnskar: "If my father dies, the Ternion monks will suffer. Understand that, healer. Now save your King."

"You again? If you do anything to harm my father, I will personally hunt you down and feed you to a Kagouti. Remember that."

After seeing all three of the visions, the King's body will begin to levitate.

Jorunn the Skald-King: "Arrrggghhh!"
Prince Irnskar: "What is this sorcerery, priest? What's happening to my father?"
High Priest Esling: "The dream … it's leaving the King's body. How … how is this happening?"

"My father is strong. In fact, he's the strongest man I've ever known.
He'll pull through this. He has to."

Speaking with him after King Jorunn awakens:

"You did it. You saved my father.
I'm sorry I ever doubted you. You have more than earned our trust."

Your response depends on how you receive the quest. If you received it from Prince Irnskar:

How fares the Skald-King?

If you received it from Hlotild the Fox:

How is the Skald-King doing?
"My father is still weak from the poison, but he's recovering. I'm organizing things here while he gets his strength back.
I need to regain the confidence of our Dark Elf and Argonian allies. My regrettable actions at Fort Amol have made them wary."
How can I help?
'"Speak to the highest-ranking Pact leaders in the camp—General Yeveth Noramil of the Dark Elves and the Argonian leader, Eyes-of-Steel.
See what we can do to demonstrate the strength of the Pact."
Right away, Prince Irnskar.

"I hope you can convince our allies of my commitment to the Pact."

Returning to him after convincing everyone:

"Well met, my friend!"
I completed the tasks for the Argonian and Dark Elf leaders.
"I received word that General Yeveth Noramil and Eyes-of-Steel will meet with me. I'll show them the respect they deserve and work to strengthen our alliance.
Once again, your aid advances our cause. You have my gratitude"

After convincing the alliance representatives to meet with him, the Prince has another favor to ask of you.

"I need to discuss strategy with the thanes and Pact leaders."
Anything else I can do?
"The Argonian and Dark Elf leaders are ready to meet. It's time to gather a council of war.
Do you think you could convince the thanes to attend as well? They're an independent lot, but their advice would be welcome."
I can talk to the thanes.
"Start with Thane Harvald. He's a close friend of my father's. If any of the thanes can be counted on, it's Harvald."
I'll go talk to Thane Harvald.

"I hope my father can attend the council meeting."
Where will you hold the war council?
"We'll meet in front of the healers' tent. I'm sure my father will feel well enough to join us."

Thane Oda Wolf-Sister: "Fildgor's at Skuldafn with the Crown of Freydis and the body of Queen Nurnhilde. For what purpose?"
Prince Irnskar: "The Orcthane plans to use them at the dragonshrine to usurp my father's throne."
General Yeveth Noramil: "A necromantic ritual, perhaps?"
Eyes-of-Steel: "The Crown is a powerful artifact. I shudder to think what the Orcthane can accomplish with it."
Thane Harvald: "I don't like the idea of that bastard using our fabled crown. And I hate that he has our beloved queen's body."
Prince Irnskar: "Father! You honor us! I'm glad to see you up and aroun."
Jorunn the Skald-King: "My brother seeks to pull my sister's soul from Sovngarde. The Crown of Freydis will see the soul, not the man."
General Yeveth Noramil: "It's good to see you well, Jorunn. We've been discussing how to approach Skuldafn."
Thane Jeggi Gap-Tooth: "Yes, yes. We discuss and we strategize while Fildgor digs in and strengthens his defenses."
Thane Oda Wolf-Sister: "So, have we come to any conclusions?"
Eyes-of-Steel: "The Stormfists have fortified the primary path to the dragonshrine. A frontal assault would take time that we may not have."
Jorunn the Skald-King: "Time is a luxury we don't possess. If Fildgor completes this ritual, all is lost."
General Yeveth Noramil: "That's why you wanted to see those scouting reports! You think there's another way into Skuldafn."
Jorunn the Skald-King: "There is always another way. Champion, may we speak?"

You will then need to speak to the king. After the quest, he will address his father:

Prince Irnskar: "Send for me if you need me, sire."

Speaking to him after the quest:

"I appreciate all you have done, both for my family and for the Ebonhart Pact."

At the end of the quest, King Jorunn will ask you to give Prince Irnskar news of the events that transpired at Skuldafn.

"Welcome back, champion! What news do you bring from the peaks of lonely Skuldafn?"

If Fildgor died by your hand:

Fildgor is dead, and the Ebonheart Pact is sealed.
"Fildgor's dead? Then the villain has paid for his crimes.
You've been by my father's side and have persevered when others would have faltered. From now on, you shall be known as the High King's Arrow, for you lead the way and always strike true."

Fildgor is dead, and the Ebonheart Pact is sealed.
"Fildgor's dead? As it should be. I mourn with my father, though.
You've been by his side and have persevered when others would have faltered. From now on, you shall be known as the High King's Arrow, for you lead the way and always strike true."

The Ebonheart Pact is sealed and Fildgor lives.
"My uncle lives? My father's mercy knows no bounds!
You've been by his side and have persevered when others would have faltered. From now on, you shall be known as the High King's Arrow, for you lead the way and always strike true."

"Your work here is done, Arrow. But know that you will always have a place of honor in the Skald-King's court."

Prince Irnskar will have traveled to Solitude along with his father and his soldiers in response to Lyris' reports. You have the option of talking to him before Jorunn in an attempt to calm the tense situation.

"I know that there's little love between east and west, but now's not the time to be picking a fight."
What are you and Skald-King Jorunn doing here?
"Lyris's report on the rise of the Gray Host had my father preparing for the worst. When we hadn't received word for some time, he decided to intercede."
If we hadn't stopped Svargrim, that might have been necessary.
"Svargrim. It's hard to believe the rumors were true. I didn't know him well, but I can't understand how anyone could throw away everything for the promise of power.
What's immortality worth if there's nothing you hold dear?"
Will your father attempt to take Svargrim's place here?
"You'd have to ask him. As far as I can tell, the western holds are in chaos. They could use a king who cares for his fellow Nords, but if the welcome we've received here is any indication, Solitude won't see it that way."
I'll speak to King Jorunn.

After you have talked to his father, Svana will arrive before the situation gets worse. Prince Irnskar remembers her meeting her when they were younger.

"I haven't seen Princess Svana since we were children. She's … changed much, since those days."
You knew Princess Svana?
"I saw her once, a long time ago. There was some brief moment in my childhood where it seemed like reconciliation between our homelands seemed possible. Might have been a dream. It vanished just as quickly."
Do you know why?
"I think it wasn't long after my father became High King. I only remember a foggy day of children's games with the princess, a joyless feast, and a swift departure.
It might have gone differently if our parents joined us making castles in the snow."

Speaking to him after getting orders from Svana.

"I was not expecting Princess Svana to be so commanding. I'd heard—well, I'm glad that not all the rumors I've heard about the state of Solitude are true."

He can later be found in the Blue Palace courtyard among the crowd that has gathered.

"The people appear apprehensive of our presence here, but no one has voiced their dissent. That's reassuring."

After Svana's address and the dirge for the dead, you can talk to Irnskar some more.

"My heart goes out to these people. We are no strangers to conflict back east, but none of our holds have been ravaged by the kind of devastation brought by the Gray Host!
We are fortunate that you stopped them."
Svana was impressive. She really stepped up when her kingdom needed her.
"So I've heard. The princess … has come a long way from the girl I met so long ago. And I've changed, as well. I'm not quite as obnoxious and close-minded as I was when my father first formed the Ebonheart Pact.
At least, I try not to be."
Do you think there can finally be peace between Eastern and Western Skyrim?
"If the princess remains in charge of the western holds, I think the chances of a true reconciliation are good. My father will certainly do everything he can to make that happen. And so will I.
Princess Svana … she's become a very impressive woman."