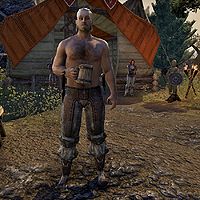 Thane Jeggi Gap-Tooth is a Nord found in various places throughout Eastmarch. He is one of King Jorunn's thanes, and loves mead.

In Windhelm, he is participating in the drinking contest.

"One cask of mead? Is that all they expect us to get through? What kind of contest is this?
I'm sure I'll need another dozen."

You are expected to rally Thane Jeggi and several others for the upcoming war council.

"Mead or milk? Are you a Nord or a gnat?"
Prince Irnskar sent me to talk to you.
"Ha! My reputation precedes me!
I may be half drunk most of the time, but my mind's still sharp. Prince Irnskar wants to meet with some of the thanes and the Pact delegates. Am I right?"
You're right.
"Of course I am! But spare me your assurances. The Prince is a skeever.
You know what will convince me to attend a boring war council? Mead. Specifically, some of Voljar's Meadery's best vintages. Some crates recently arrived in camp."
Who has the mead?
"I know who doesn't have it. Me!
A crate was given to the Dark Elves, but they loathe the stuff. Ask their quartermaster. Bet they'll give it away. Or just look for bottles lying around. I don't care where it comes from, as long as it's mead."

Returning with the mead:

"Any luck acquiring some of that Voljar mead?"
Here's the mead you asked for.
"Ah, this is the stuff! Drink with me. To the Skull-King's health! I mean ... the Skald-King!
A Skull-King would not be a good thing."
I suppose one drink won't hurt.
"That's the Nord spirit! Sort of.
Next time though, try it like this: "I suppose one drink isn't enough!""

After you give him the bottles, he says the following before heading up to the healer's tent:

Thane Jeggi Gap-Tooth: "I need some fortification if I'm going to attend the council. I'll head over there after I drink this bottle."

During the war council, Thane Jeggi has one contribution.

Thane Oda Wolf-Sister: "Fildgor's at Skuldafn with the Crown of Freydis and the body of Queen Nurnhilde. For what purpose?"
Prince Irnskar: "The Orcthane plans to use them at the dragonshrine to usurp my father's throne."
General Yeveth Noramil: "A necromantic ritual, perhaps?"
Eyes-of-Steel: "The Crown is a powerful artifact. I shudder to think what the Orcthane can accomplish with it."
Thane Harvald: "I don't like the idea of that bastard using our fabled crown. And I hate that he has our beloved queen's body."
Prince Irnskar: "Father! You honor us! I'm glad to see you up and around."
Jorunn the Skald-King: "My brother seeks to pull my sister's soul from Sovngarde. The Crown of Freydis will see the soul, not the man."
General Yeveth Noramil: "It's good to see you well, Jorunn. We've been discussing how to approach Skuldafn."
Thane Jeggi Gap-Tooth: "Yes, yes. We discuss and we strategize while Fildgor digs in and strengthens his defenses."

This Online-related article is a stub. You can help by expanding it.
Retrieved from "https://en.uesp.net/w/index.php?title=Online:Thane_Jeggi_Gap-Tooth&oldid=2129874"
Categories:
Hidden categories: