The UESPWiki – Your source for The Elder Scrolls since 1995
< Morrowind: Items: Materials and Styles(Redirected from Morrowind:Glass Armor)
Jump to: navigation, search 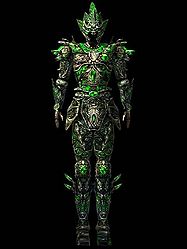 Glass weapons and armor are an ornate design: light and flexible, although very difficult to make and expensive. Glass armor is a lightweight armor created using rare metals studded with volcanic glass. The result is stronger than steel due to its ability to absorb and distribute shocks very well. Glass armor not only surpasses other light armor in strength, but is also superior to most medium armor (with the exception of a few Artifacts and some new medium armor added by the two expansions). The armor is favored by the Buoyant Armigers, and one of the only places it can be found for sale is at their stronghold in Ghostgate.

Glass Armor is rather rare, and since it's mostly worn by members of the Buoyant Armigers, it may be difficult to acquire a full set without killing non-hostile NPCs for it. If you've got a lot of money to burn, Dronos Llervu in Ghostgate's Tower of Dusk Lower Level can potentially have a complete set for sale (he does not have a fixed copy of the greaves and tower shield, but they have a chance of spawning in a crate that is accessed by his merchant table). Or, if you're sneaky enough, you can steal most of it from him. Notably, Dronos' shop is the only place you will find the Bracers in Vvardenfell (but they are available in Mournhold- see below). They don't even show up in random loot, so you'll have to either buy them or steal them from him.

Additionally, there are three crates scattered throughout Vvardenfell that each contain up to 3 random Glass Armor pieces (excluding bracers). They are in the following locations:

You might want to save before opening these crates, in order to reload if you don't get the pieces you need (causing the area to reload by leaving and returning can also be used to force the loot to be re-rolled as long as you did not take anything out of or place anything within the crates).

The TribunalTR expansion added several additional sources of glass armor that include bracers:

Other sources for a possible random Glass Melee Weapon

There are many places with random respawning Daedra or guaranteed Golden Saints e.g. Daedric Shrines.