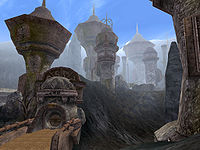 Nchuleftingth is located south of Uvirith's Grave in the central Molag Amur region, and it is marked on the world map.

This Dwemer Ruin is where Edwinna Elbert may send you on a Mages Guild quest to retrieve an excavation report.

Nchuleftingth is divided into three sections: the Lower and Upper levels, and the Test of Pattern.

There are no enemies here. Two NPCs, Senilias and Pania Cadiusus are here though, working on the excavation, who inform you that Anes is missing, and he had the excavation report. There is a Key to Nchuleftingth lying on a table next to a bottle of Flin. Further in is a Dwemer telescope, with a Dwemer Coherer next to it and a Dwemer Cylinder on a ledge.

The only point of note is that there are three cranks in this room. The furthest crank from the door to the upper level is the one that opens the passage to the lower level. The other two cranks are traps.

There are four Dwemer enemies here, as well as one already dead. There are some important items here: a copy of Hanging Gardens of Wasten Coridale, a key to a locked chest that is on the floor beside a bed frame, and Anes Vendu's corpse, which has the excavation report. 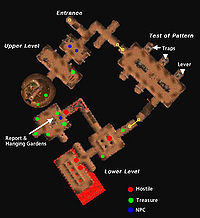