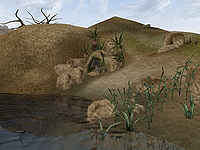 Yakin is a Sixth House base cavern on the coast of the Grazelands.

It is found on the mainland coast northwest of Tel Aruhn, which is, itself, directly west of Sadrith Mora. The entrance is just steps from the water and the door faces southeast. One could easily pass it traveling east and northbound along the shoreline, as the entrance is surrounded and backed by a small formation of rocks.

There are the usual assortment of leveled Ash Creatures here - several Ash Ghouls are guaranteed. The shrine area is presided over by the Ash Ghoul Dagoth Velos. He does not have a 6th House Amulet. In the Bell chamber located off the shrine area is the usual assortment of treasures, such as potions and clothing and money. There is also a Glass Jinkblade and an armorer's hammer.

This is the cave where you are directed to go to by Skink-in-Tree's-Shade for a Mages Guild quest. 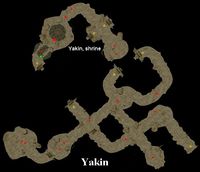