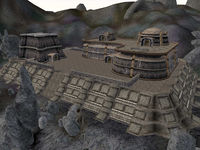 Marandus is a Dunmer Stronghold in the southern part of the Ashlands. It is located to the northwest of Suran, on the shore of Lake Nabia. It is one of the many ancient strongholds left from a brighter time in Dunmer history.

Strongholds have largely been abandoned, but remain attractive to the underworld. Marandus has been taken over by a group of rogue Redorans looking to expand the influence of House Redoran in the Ashlands. It has a Propylon Chamber linking to Telasero and Hlormaren, and the Dome houses a chest with a random ebony weapon.

With enough faction reputation, the Redorans in this stronghold will not be hostile. 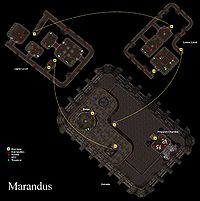