The UESPWiki – Your source for The Elder Scrolls since 1995
< Bloodmoon: Places: Caves
Jump to: navigation, search 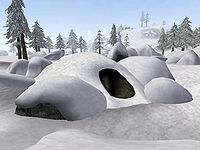 Sjobal is a small ice cave located northeast of Thirsk. 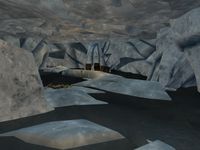 There are a couple chests in here, as well as several barrels and a crate with loot. There are no monsters, just a very hostile NPC, whom you catch doing a wicked act just as you enter the cave.

Upon entering the cave, you will hear the grunts of dying people. When you reach the cave's large room, you will find three dead Argonians and one angry Dunmer, Thauraver. You can find his orders on his corpse, which explain that he was an assassin hired by the mysterious "K" to kill these runaway slaves. Reading it will give you a Security boost.