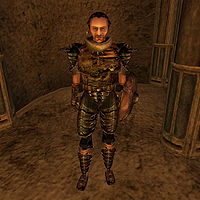 Caius Cosades knows and trusts him. He is a thoroughly honest man, and you can ask for his advice on many quests from his more morally ambiguous colleagues.

He wears a near full set of netch leather, including the cuirass, both pauldrons, both gauntlets, greaves, boots, and shield. He also wears common pants and wields a steel broadsword of hewing. He carries an iron key which opens a few locks in his private quarters. Aside from his natural charm and ability to absorb fatigue from others, he knows no spells.